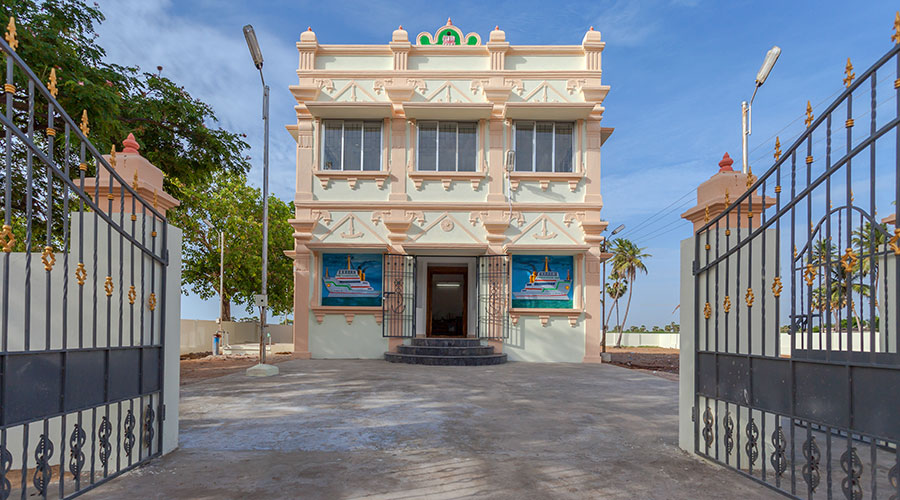 The Puhar port known by several names such as Kaveripattinam, Kakhandi, Cholapattinam, Champapathi and Kaberis Emporium. was busy at the time and traded items, foodstuffs and spices and was prettier than London

India’s only marine archaeological museum at Poompuhar, where artifacts recovered from underwater exploration are on display. TN Department of Archeology website

The Union Ministry of Culture’s response to the recommendation of the Parliamentary Standing Committee on the revival of underwater archeology should please archaeologists across the country. Considering that the Underwater Archeology Wing of the Archaeological Survey of India (ASI) has been gone for a decade, the revival of the wing will hopefully add more insights into the underwater excavations which have been abandoned in the past.

In its 305th report on the Parliamentary Standing Committee on Transport, Tourism and Culture, submitted to the Rajya Sabha on February 2 and tabled in the Lok Sabha on the same day, the 31-member committee headed by TG Venkatesh recommended that the ministry that underwater archaeological exploration should be revived in the states of Maharashtra, Gujarat, Tamil Nadu (TN) and Odisha.

Highlighting that ASI is relaunching its underwater wing, the ministry said an additional officer at the director-general level, who was appointed recently, is an expert in underwater archaeology.

Interestingly, TN has a rich history of doing underwater archeology. In 1981, the Goa-based National Institute of Oceanography (NIO), together with the TN Department of Archeology, had carried out offshore exploration at Poompuhar, once a former port of TN and now a town in Mayiladuthurai district. In ancient times, the 2,000 year old city was known as Kaveripoompattinam or Kaveripattanam. During this exploration, they had found mysterious objects near the shore at a depth of 7-8 meters.

“Objects of a similar nature were noticed in deeper waters but could not be identified as no diving was undertaken,” Dr Sila Tripathi, researcher at the Center for Marine Archaeology, NIO, wrote in an article published in 2004.

Exploration was done by deploying sophisticated machinery such as side scan sonar, echo sounder and megnetometre. These sophisticated machines showed tangible results on charts, Natana Kasinathan, then director of the state archeology department, said in her book. Underwater exploration off Poompuhar published in 1991.

“On the advice of the NIO, the State Department of Archeology submitted a proposal to the government to carry out the intensive exploration. The government was happy to grant an initial sanction of around ₹10 lakh for the year 1990-91,” he wrote.

Accordingly, exploration began on February 25, 1991. Between 1993 and 1995, the second and third phase of exploration were carried out. During explorations, brick structures, clay annular shafts, cargo and wreckage were discovered. A site, traditionally known as Karaiyappar, has also been identified.

“This site is about 4-5 km from the seaside. If this structure is found to be one of the structures of the ancient city of Poompuhar, the city could have been extended to this part. There could therefore be the possibility of having about half of the city submerged under the sea. The reference to the submersion of Poompuhar in the literature has clear implications and is proven beyond any doubt by the material evidence. Further investigation would reveal more facts about the glorious city of Poompuhar,” Kasinathan added.

The city is said to have been submerged under the sea off the coast of Nagapattinam in TN. Tons of ancient Tamil literature and early geographers and historians like Ptolemy and Pliny have described the Chola city of Kaveripoompattinam as a vital seaport that had trade links with the Roman Empire and China before it was swept away by sea waves. tide, now recognized as a tsunami.

“More exploration is needed in Puhar”

It is disheartening to note that even though the exploration at Poompuhar has not been fully realized, the TN government has recently decided to continue the exploration of another ancient port of Korkai in Thoothukudi district from this year. said V Jeevakumar, a Tiruchy-based lawyer and archeology enthusiast.

“In the past, Puhar Port was known by several names such as Kaveripattinam, Kakhandi, Cholapattinam, Champapathi and Kaberis Emporium. It was then a very active port and traded in articles, foodstuffs and spices. The town planning of the port was divided into Maruvurpakkam (where trade took place), Pattinappakkam (where temples and palaces were located) and Nalangadi (where natural groves flourished). For these reasons, the famous Tamil scholar and historian TV Sadasiva Pandarathar claimed that the beauty of Poopuhar is greater than the beauty of London,” he said.

It is a pity that the state government ignores these facts and shows no interest in continuing exploration here, Jeevakumar added.

Addressing the Federal Government, Dr T Satyamurthy, Former Superintendent Archaeologist, ASI, Chennai Circle said that instead of embarking on underwater exploration at a new site, the government can focus on the existing site where archaeological evidence has already emerged.

“The exploration in Poompuhar wasn’t even a search. It was just a scanner. In the sea itself, we have more evidence. So let the government finish the search in Puhar, then they can go to Korkai. As for Korkai, there has been no underwater archaeological evidence so far, so rather than going for more and more sites, let’s go for a deeper exploration of the existing sites. Instead of approaching this problem emotionally, we need to look at it from a scientific point of view,” he said.

Lamenting the lack of underwater archeology experts in the state, Satyamurthy added that the state could take help from institutes such as Chennai-based National Institute of Ocean Technology, Geological Survey of India, etc

A closer look at the Traser P67 Diver Automatic