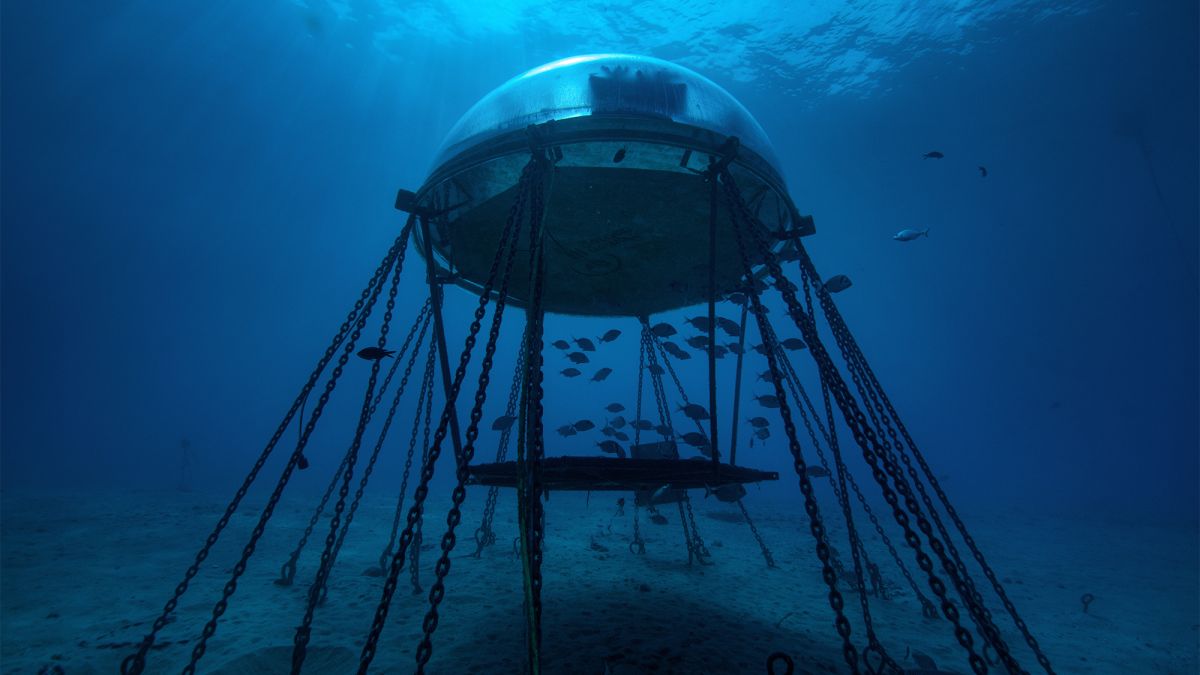 Bond lair of bad guys or underwater ecological farm? The photographer talks about his award-winning work

In less than two months, the 2022 Environmental Photographer of the Year will be announced. The award has never been more critical, as it continues to spotlight the most inspiring environmental photographers around the world and raise awareness of the environmental issues facing our planet.

Last year, Italian photographer Giacomo D’Orlando was awarded for his work documenting an autonomous underwater farming project, which could be an eco-friendly solution to current farming methods that involve deforestation and the loss of water. ‘habitat.

• These are the best waterproof cameras (opens in a new tab)

Giacomo had an affinity for photography from an early age and always enjoyed watching nature documentaries with his grandfather. At 21, he decided to pursue a career in photography and has since won several awards, including the Sony World Photo Award and Environmental Photographer of the Year. It was also published in National geographic, The Washington Post and Stern magazine.

With the next installment of Environmental Photographer of the Year fast approaching and the COP27 summit just weeks away, we caught up with Giacomo to chat about what winning the award meant to him, from the how he ended up becoming an environmental photographer, and why it’s so important to raise awareness about climate change and its environmental impacts.

Giacomo D’Orlando is a documentary photographer who focuses on telling stories about environmental issues. His work examines how the increasing pressure caused by climate change is reshaping the planet and how today’s society is responding to the new challenges that will characterize our future. He has received prestigious awards such as the POYI in Science and Natural History, the Sony World Photography Award in the Environment Category, and the United Nations World Oceans Day Photo Contest in Nature-Based Solutions and ocean exploration.

When did you turn to documentary photography and what specifically prompted you to focus on the environment?

I’ve been interested in photography since I was a kid, although it wasn’t until I was 21 that I realized it was what I wanted to do as a career. I dreamed of traveling while sharing stories and inspiring people all over the world. My grandfather was passionate about Jacques Cousteau and National Geographic documentaries, and I remember how much I loved watching them together on TV, so I decided to become a documentary photographer.

I focused on the environment because it should be a priority to educate people about the importance of our environment, especially now that we are reaching an irreversible breaking point. I want my work to inspire people to take action and preserve and protect our planet.

You have an impressive list of awards to your name. Were any rewards particularly special?

Thank you so much, I am truly grateful for each award and the chance to showcase my work and hopefully inspire more and more people to care about our planet.

I am quite attached to the POYi Excellence Award in the Science and Natural History category. The competition was at the highest level and I had to compete with some of the photographers that I have always loved since the beginning of my career and other colleagues that I hold in high esteem. I never thought I could have achieved this goal and to me it’s just mind blowing.

Having my photography shortlisted for the Environmental Photographer of the Year award is also a favorite because so much work has gone into capturing my submissions. Whether learning to dive and taking dive exams to document Nemo’s garden, visiting Noli four times to photograph the various phases of the project, and visiting the University of Pisa for the project laboratory, it was an incredible experience. .

I’m really proud to be able to offer a positive vision of what a more climate-friendly future could look like on the international stage, especially since last year’s photos were exhibited at the COP26 conference. . Looking ahead, winning the Environmental Photographer of the Year award would make me even more proud of myself and my work, and would certainly be an unforgettable achievement.

If you could go back and redo one project, what would it be and why?

As many other photographers would say, there’s more than one project we’d love to take on, especially ones we did early in our career. Personally, I would do all the social reporting done between 2015 and 2017. But, if I had to choose an environmental shoot, I would do my ‘Submerged Conscience’ report made in the Great Barrier Reef. In 2018 I didn’t have a scuba certification or a proper underwater camera as I was using GoPro to film during the snorkeling sessions.

I have the chance to return to Australia at the end of 2022 to redo this sequence, to include it in the second chapter of my long-term project “Symbiosis”. I am sure that with my current knowledge on the subject and my improved skills, I will do a better job!

Are you working on new projects?

I have been working on ‘Symbiosis’ since early 2022, which will take at least four years to complete and focuses on the impact of climate change and anthropological stressors on the marine environment and coastal communities around the world. These include coral bleaching, biodiversity loss, coastal erosion, sea level rise and ocean acidification, and I want to study how these affect life coastal communities.

A central part of the project will be devoted to the positive solutions that local communities and scientific authorities are undertaking for our future by preserving the health of the marine ecosystem. I hope to inspire stakeholders to multiply positive actions aimed at preserving the marine environment for generations to come, so some exciting years ahead!

What is the best advice you have received for pursuing a career in documentary photography?

Don’t give up and follow your dreams. I’m probably only halfway through my career, and from experience I can tell you to find stories that you really enjoy sharing and that will keep you driven.

What equipment do you use?

Apart from Italy, in which countries did you feel most comfortable?

Since the start of my photojournalism career in 2015, I have lived in Nepal, Peru, Australia, New Zealand, and in recent months in Thailand and Indonesia. I must say that in each country I left a piece of my heart and met many nice people who became my dear friends.

For me, the concept of home is where you live in the present. I never felt like an outsider, because I think our home is actually our planet and not a single state with borders created by governments. It’s also why I’m so committed to telling stories about the environment, because they unite us as human beings instead of pulling us apart as individual citizens.

If you found yourself on a desert island, what accessories would you take with you?

Well, that’s a tricky question. Of course, as a normal person, I would bring a survival kit that would allow me to find food and maybe help me build a safe shelter. As a photographer, I would bring a film camera with plenty of film to document my experience as a survivor, hoping that one day someone will find me. It would be interesting to share this kind of experience and it could also be a way to keep me busy so I don’t go crazy. In the end, I hope to be lucky or smart enough not to face these kinds of issues in the future.

How important is it for competitions such as EPOTY to continue to raise awareness of issues such as climate change?

It is extremely important. I’m just one person, but contests like EPOTY attract thousands of entries and winners are posted around the world to inspire positive action to preserve and protect our planet. High profile sponsors such as Nikon, CIWEM and WaterBear play an important role in encouraging people to participate and raising awareness among multiple different stakeholders. For any other aspiring environmental photographers or those interested in raising awareness about climate issues, I can’t recommend enough to enter the EPOTY contest.

It’s a great opportunity to meet other people who are not giving up in the face of these new challenges brought by climate change but rather striving to find new solutions for our future, which gives me so much more hope .

Do you have any goals that you are currently working towards?

My goal is to encourage people to understand the importance of our environment. My approach is to document the positive solutions that humanity seeks in order to stimulate a proactive debate about our future. Rather than simply documenting the impact of climate change on our planet, which could be counterproductive as it can generate such feelings of despair, I hope to inspire people with an alternative positive climate vision for the future.