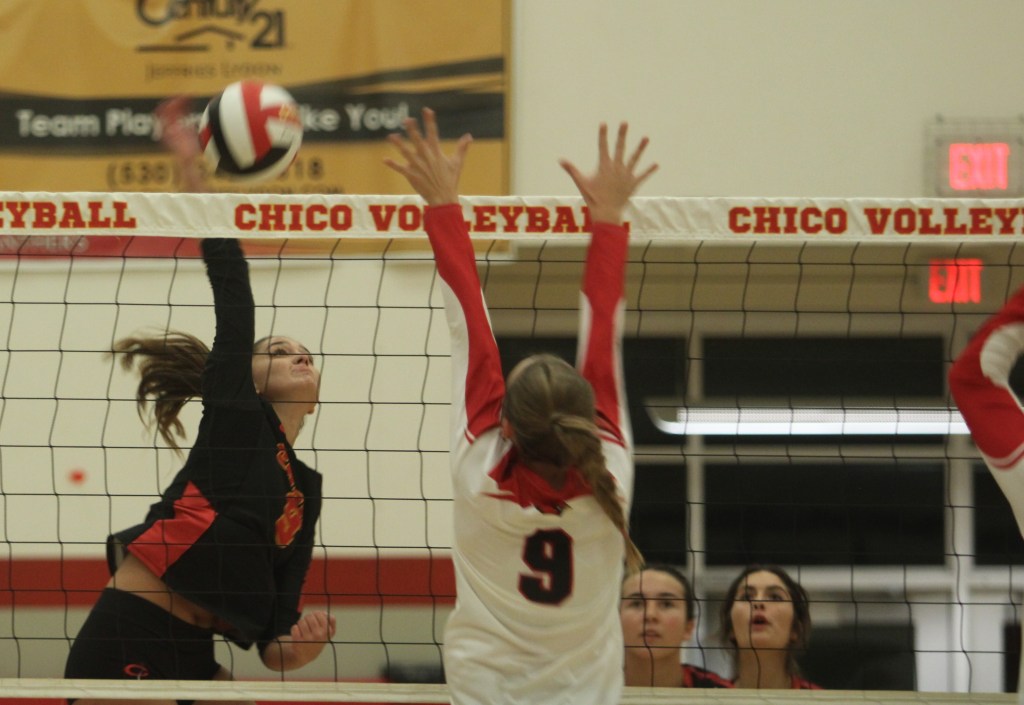 CHICO — The Chico High volleyball team came out excited and ready to play Wednesday night in the first round of the Division II North Section playoffs against Corning. The stands were packed as the Panthers packed with youngsters prepared for the playoff atmosphere.

“We definitely went into this game knowing that we had to focus on certain things like ball control and I felt like we did a good job at times, other times not so well,” said said Chico captain and senior Maya Cann. “I think we’ve worked a lot better as a team recently and I think we need to bring that back to PV.”

Chico got off to a good start in the second set as well, leading 6-0 with three points from Cann’s kills. The Panthers led 9-1 and extended the nine-point lead to 13-4 on a Cann kill. Chico’s biggest lead of the set came at 21-11 on a kill from rookie Kaycee Konopka. Chico won the second set when sophomore Mylee Finney hit him softly over the net in the front left corner to give the Panthers a 25-16 lead.

Chico’s head coach, Chas Konopka, said he tried to bring all of his players in tonight to experience the playoffs and get rid of that weight. The Panthers have 11 juniors on their team and only four with playoff experience from last year.

“I think it was important for them to gain experience and feel part of the team,” Konopka said.

Cann said having the freshman and sophomores on the field Wednesday keeps the upperclassmen on another level of responsibility and provides new life for the team in the streak. playoffs. She said that as a senior she wanted to show them how to get the most out of the practices by working hard.

Corning opened the third set winning four of the first five points to take a 4-1 lead. It was the first lead of the game for the Cardinals. Chico fought back and won four straight points to take a 5-4 lead. Corning tied at 5-5, but Chico took a 6-5 lead on a kill from senior Kendal Kyle. After the Cardinals again tied the set at 6-6, Chico took a 7-6 lead and wouldn’t give up the lead for the rest of the game.

Chico led 11-9 and scored five straight points to take its biggest lead at 16-9. Corning went under four points at 19-15, but Chico closed the game with six straight points to win the set 25-15. Senior Rebecca Digmon softly hit a midfield ball that landed midfield among a group of Cardinals divers for the game winner.

Junior CJ Baker led Chico with seven kills, and Addie Konopka and Kyle had five each.

Cann said against PV that the Panthers need to continue working on ball control and working as a team. An important note she pointed out was that body language will be key. They must not show bad body language to their teammates or let their opponent see it.

Konopka said his team had been worrying about other teams throughout the year and now only worries about what his own team is doing.

“I say that to girls quite often,” Konopka said. “To celebrate each other, be happy for each other and let’s worry about what we do on our side of the net.”

Chico High was named the No. 4 seed at Friday’s ranking meeting. The top three seeds in the North Section received byes in the first round and it was between Chico (20-18, 6-4 Eastern Athletic League) and Shasta (18-17, 6-4 EAL) for the third and fourth positions. The two teams split regular season head-to-head games and, under EAL rules, the next tiebreaker is a coin toss, which Shasta won to receive a bye. in the first round.

Divisions are based on registration and it depends on the guidelines of each sport, according to North Section commissioner Scott Johnson. In volleyball, the top eight enrolling schools from the previous year are ranked in Division II, and Division III is the next eight schools.

The North Section Volleyball Championships will be held Nov. 5 at Foothill High School in Palo Cedro.

To see the full installment of the Northern Section Volleyball Tournament, from D-II to D-VII, visit https://www.maxpreps.com/tournament/Xn23405PEe2A0wqb9tl3hA/volleyball-22/2022-23-nscif-volleyball-playoffs.htm.

Swimming is ready to start the season at Bellarmine Duals