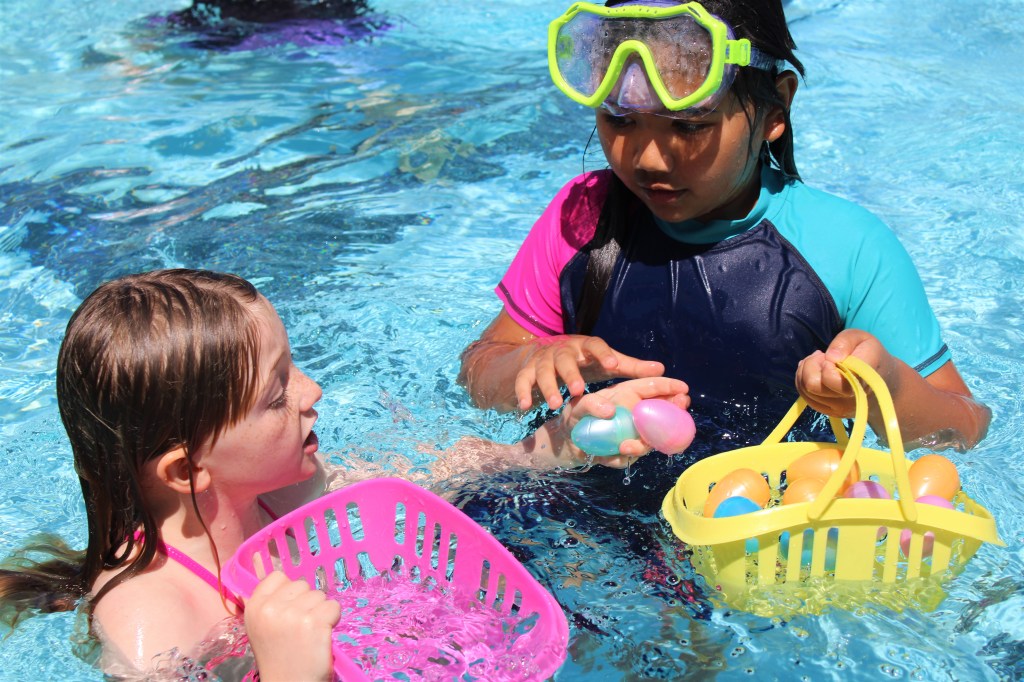 On a hot but windy Saturday afternoon, children with swimming goggles in one hand and a basket of Easter eggs in the other rushed to line up at the Walter Graham Aquatic Center in Vacaville.

Eager to enjoy the water and go in search of Easter eggs, Moriah Deguia, 8, from Vacaville, prepared for his aquatic adventure.

“I was pretty excited because Easter egg hunts are fun,” Moriah said. “When you open them, there is a nice surprise. Sometimes you don’t really know what it is because it’s an easter egg and there could be anything inside.

The Walter Graham Aquatic Center hosted its annual Underwater Easter Egg Hunt, inviting youngsters of all ages to jump into a designated pool to collect up to 10 eggs and have fun indoors or outdoors some water.

Elizabeth Crisante, the town’s recreation supervisor, expressed her enthusiasm for the event.

“To see everyone wanting this type of event… It’s really wonderful,” she said. “The staff are happy too. This kind of kicks us off into our busy season.

Andrew and Kaitlin Wohler from Vacaville were new to events but not to facilities. Having swum at the aquatic center throughout their childhood, they heard about the underwater egg hunt in early February and knew they had to go. Especially when their 3 year old son, Koen, kept asking.

“He talked about it every day. He was ready to go Easter egg hunting in the water,” Kaitlin said with a laugh.

Even before the start of the event, areas have been designated for age groups to make the event safer for everyone. Swimming in the recovery pool at the bottom of the slides were children aged 0-5. Those in this age group who were not interested in water sought land near a play structure.

Children aged 6 to 8 swam in the first wave in the large pool while those aged 9 to 12 followed in the last wave.

Robert Bekosh, 6, from Vacaville, couldn’t help but befriend any child that crossed his path, which made his mother, Danielle, happy.

“Before the event even started, he came upstairs and spoke to one of his peers, which was awesome,” Bekosh said. “He started making friends and really cheering them on. I think it was really great to see him mingle with his peers.

During the excavations, both in the water and on land, the children were allowed to grab 10 eggs each in fairness. Many were looking for the golden egg, which came with a gift bag containing toys and candies.

This, however, was not Moriah’s priority.

“I was just trying to catch as many eggs as possible,” he said.

Once all the eggs ended up in each child’s basket, the rest of the event was dedicated to families enjoying a free swim, playing games outside the pool, taking pictures with Mrs. Bunny Bonnet and enjoy the sun. After enjoying the event, the Wohlers are going to keep an eye out for future events to attend as a family with summer on the horizon.

“We had a lot of fun and look forward to more events,” said Kaitlin Wohler.

Hearing the newcomers enjoying the fun made Crisante happy.

As a facility for swimming lessons and freestyle swimming, the Walter Graham Aquatic Center plans to host other events, including three different movie nights over the summer and a cardboard boat regatta on the first Saturday. of August.