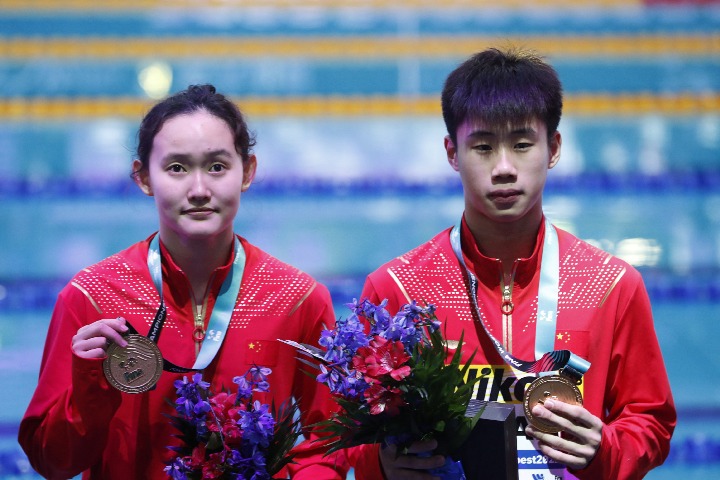 The Chinese team did not miss a title at the Worlds in Budapest and Duan and Ren took the record to 10 gold medals on Friday by winning the mixed synchronized 10m with 341.16 points.

This is Ren’s third world title as she won the women’s and mixed synchronized 10m in 2017.

Ukrainian rivals Sofia Lyskun and Oleksii Sereda (317.01) and Delaney Schnell and Carson Tyler of the United States (315.90) ​​were beaten to second and third place respectively.

With Duan and Ren’s gold on Friday, China is keeping pace with the United States in the championships all-discipline medal table thanks to the flawless performance of Chinese divers, and they have a great chance to top the count if they continue to perform regularly in diving competitions in the remaining two days.

But the fate of the eventual winner is in the hands of the water polo players, as the USA women’s team has a strong chance of winning the final on Saturday.

On Saturday, the divers will compete in the women’s 3m springboard final, while the women’s water polo final will take place later in the evening between the United States and hosts Hungary.