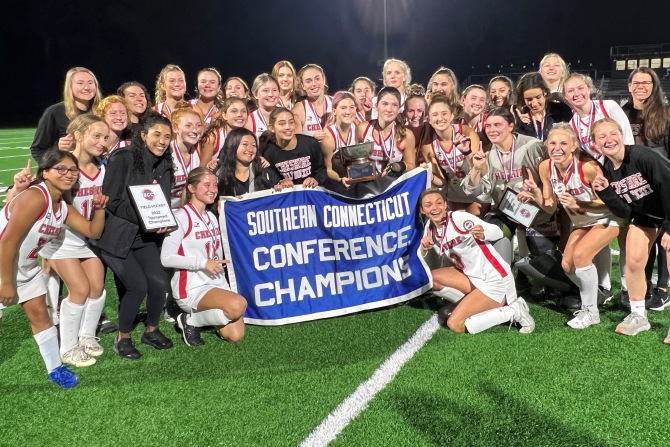 The crown was Cheshire’s eighth overall and first since 2016. The Rams had not beaten Mercy since 2014.

For only the second time this year, the Rams have trailed in a game. With 29:05 remaining in the first half, second-year Julia Salley sent a free kick into the right corner of the net to put Mercy ahead 1-0.

Down at half-time, the Rams were aggressive and their pressing paid off on a corner. After receiving a pass from sophomore Ava Sink, senior tri-captain Anna Hurlbut fired a laser shot into the top right of the net to tie the game with 27:59 remaining.

Cheshire clinched the game winner with 3:15 left. On a scramble down the middle, Sink sent a pass to senior tri-captain Gabby Tirado, who dribbled down the middle with a defender and fired the ball into the net.

Junior goaltender Sophie Bates made four saves in the win.

Tirado was awarded the SCC Tournament MVP. She was also voted player of the year.

The Rams are the top seed for the Class LL tournament. Support has not yet been released.

CHS took the lead with just 16 seconds left in the first half. On a penalty corner, three-time senior captain Colby Paul scored on a pass from Reilly Whalen senior.

With 3:36 left in the third quarter, Branford tied the game on a penalty kick from senior Lauren Kendrick.

When it looked like the game could go to overtime, the Rams struck with just 29 seconds left. After assists from seniors Clara Dempsey and Taya Buntin through the middle, Ava Matikowski turned and kicked the ball into the cage for the game winner.

CHS is now awaiting seeding for the Class L tournament.

After seeing their nine-year reign ended by Amity last fall, CHS regained the CSC’s No. 1 spot at SCSU. The Rams compiled 1,226 points to win title contention for the 27th time in 29 years.

Prior to the final, Potyrala (Swimmer of the Year) and Matt Traub (Coach of the Year) received SCC Division I awards.

On Nov. 9, the Rams begin Class L with the diving final at Middletown High School. Departure time is 5:30 p.m.

On Saturday at 1 p.m., the CHS are chasing a third consecutive CSC title against Amity (3rd seed, 18-3) in West Haven. Cheshire beat the Spartans 3-1 on September 27 and October 17.

The Rams have a record 15 crowns.

Cheshire heads to Wickham Park in Manchester for the State Open at 2 p.m.