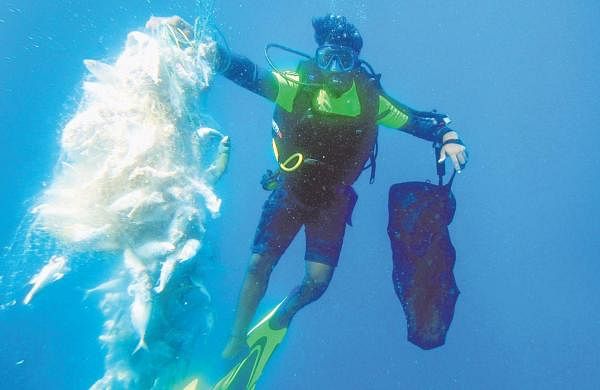 CHENNAI: As part of a community initiative, the fishing village of Tiruvottiyur has declared a public holiday on Friday to collectively clean up the artificial reef site near its shore. Around 25 fishermen in five boats sailed out to three nautical miles at around 8:20 a.m., accompanied by two certified divers from the Ocean Delight diving school in Kovalam, to clear the reef.

The divers – Venkatesh and Rahul – who are also from the fishing community, captured stunning images of the rich marine fish life near the reef. During two separate dives, they spent nearly 90 minutes underwater and retrieved several ghost nets that trapped hundreds of mackerel, most of which were found decomposed.

Artificial reefs or improvised fish aggregating devices (FIDAs) were deployed by the National Department of Fisheries with technical assistance from the Central Marine Fisheries Research Institute (CMFRI). A total of 6,000 artificial reef units weighing around 5,250 metric tons have been deployed in 30 different locations in and around Chennai. A preliminary assessment showed an aggregation of juvenile fish at all sites. However, it is important to periodically monitor and keep the sites free from ghost nets which drift from the deep sea and cover the reefs hindering the concentration of fish.

CMFRI scientist Joe K Kizhakudan, who deployed the FIDAs, told TNIE, “It is important that the fishermen themselves take care of the reefs near their shore. It was heartwarming to see the fishing village of Tiruvottiyur declare a public holiday and undertake the reef cleanup with the support of community divers. It is a sustainable model that does not need any help from others.

Kizhakudan accompanied the fishermen during the cleanup. Venkatesh, one of the divers, told TNIE that the reef was in good condition as many species of fish had started to colonize there. Fisherman Lokesh said a whale shark was seen feeding on the reef a few days ago.

The stunning underwater visuals showed the presence of several varieties of commercial fish like scads, jacks, perch, barracuda, snapper, groupers, mackerel, etc. Good plankton growth was observed on the reef structures. The founder of the TREE Foundation, Supraja Dharini, who was invited to participate in this new initiative, supported fishermen and divers with honoraria.