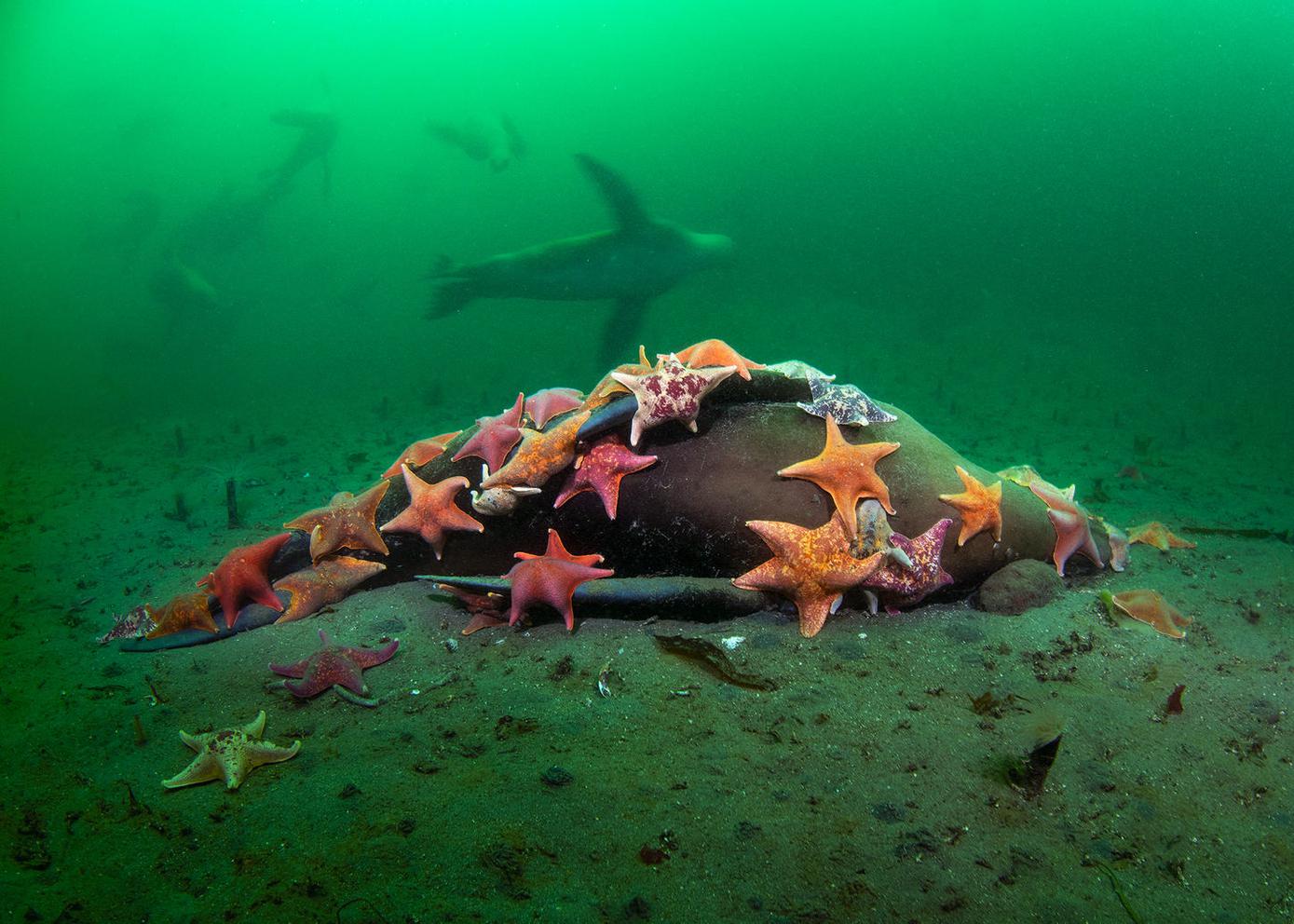 And a Monterey emergency tech who went diving last September and came across a dead sea lion slowly being eaten by starfish, 40 feet below the surface.

“It was quite ironic – I’m here on my day off and I meet this huge dead sea lion,” David Slater, 32, recalls of the first of what became six visits in a dark scene but haunting. “There was sadness, but also a certain nurturing beauty.”

Slater, who moved from Hawaii to Monterey five years ago, had his image “Sea Lion Fall” selected as the best photograph in the “Life Aquatic” category of the Academy’s BigPicture: Natural World Photography competition. Created in 2014, the competition attracted more than 7,000 participants this year. Of these, only nine were selected to receive awards.

As someone who says he “has been obsessed with underwater photography since I was a kid,” Slater knew BigPicture. But he had never thought of entering until real life intervened.

“Sea Lion Fall” was taken on the sixth and final dive Slater took to survey the scene off San Carlos Beach in Monterey. At each visit, the sea lion remained at the bottom of the ocean, its face buried in the sand. With each visit, Slater saw more and more members of one species sustenance from the remains of another.

When last visited, two dozen bat stars of varying sizes and hues had attached themselves to the carcass, locked tightly so that one of their two stomachs could use enzymes to break down the solid mass and the make digestible.

Slater knew the macabre technical details, as he has a degree in marine biology from the University of Hawaii. But he also knew he was encountering a rare glimpse into nature’s life cycle. One made more solemn by a handful of sea lions hovering nearby, keeping watch but not intervening.

“Seal lions are quite intelligent creatures, and I was wondering if the one that died belonged to this colony,” Slater said in a phone interview.

For his last visit to the fallen sea lion – between shifts at the Monterey Peninsula Community Hospital – Slater brought the equipment to take vivid images of the world underwater, including strobes to capture the true colors in the vaporous underwater setting. What he returned with has a calm, haunting surrealism – a still gray creature dotted with colorful starfish, while other sea lions formed a dark chorus in the background.

“I knew the photo was special to me,” said Slater, who has an Instagram account dedicated to his after-hours passion. “But for the judges to agree? I literally don’t believe it.

An exhibition of the seven BigPicture winners and 42 finalists will take place this fall starting September 30 at the Academy’s home in Golden Gate Park.

The full set of 49 award-winning and finalist photos is available at www.bigpicturecompetition.org/2022-winners.

John King is a writer for the San Francisco Chronicle. Email: [email protected]