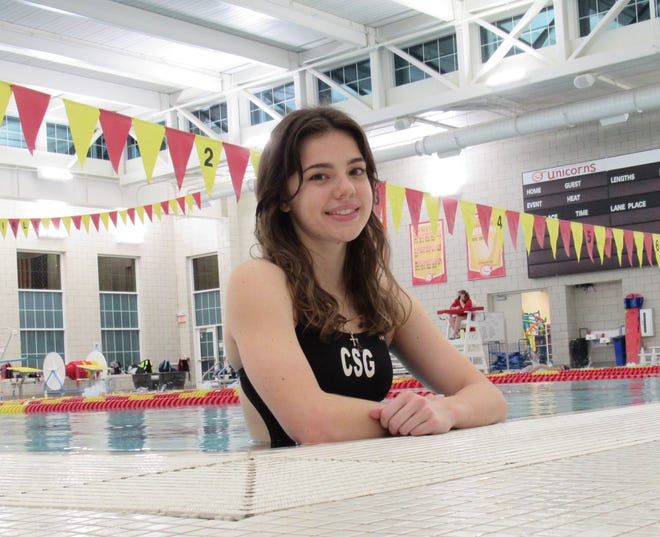 The Columbus School for Girls senior is a district qualifier who also starts for the basketball team. On top of that, she manages to find enough time to study in order to maintain her GPA of 4.0.

The busy schedule suits him, however. In fact, Spangler didn’t want it any other way.

“I’ve been playing (two sports in the winter) for as long as I can remember, probably since grade five,” she said. “I am a competitive person and I like to challenge myself. I like to stay busy, and getting into it is rewarding.

Spangler specializes in the 100-yard breaststroke, posting his best time in the Division II district competition last season while placing seventh in 1 minute, 11.7 seconds. She was also 20th in the 200 freestyle in 2: 12.29.

“I qualified for the district all three years in breaststroke, which is a swim that I just got drawn to,” said Spangler. “I like it because it’s technical. This is the slowest shot and I love it because you can glide through the water.

“I don’t have time to get into swimming condition (because of the basketball) so I can’t do the 100 freestyle shear, but I can focus on a more technical swim like the chest. It is an event in which I can see more success.

The Bexley resident and her family moved to central Ohio from the Philadelphia area when she was in her seventh grade. She started swimming in fourth grade, following in her sister’s footsteps, sophomore Bethany Spangler.

The youngest Spangler, who only swims in the winter, was a member of the 200 medley state champion last season (program record 1: 42.96). Also on the relay were junior Olivia Morse and 2021 graduates Ava Fortney and Nyah Funderburke.

“I started swimming in fourth grade and started pretty much because of my sister,” Emma said. “My mom (Caryn Spangler) saw it as an opportunity for me to stay in shape. I started to love it and wanted to do more than a conditioning sport. “

“In the past four years, Emma has been to every basketball practice, as long as there is no swimming competition,” Botzman said. “She goes to all of our morning options and trains more with her club swim team.”

Spangler starts early and finishes his homework late, diligently budgeting his time. Free time is not included in the equation.

“It’s a lot of work,” she says. “Most mornings, from 6 am to 7:30 am, I’m in the pool working out in the morning. I also have the option of going to club training, which is done with the Central Ohio Aquatics Club (in St. Charles). Then I go to school and practice basketball.

“I study whenever I can, and sometimes it’s late at night. I must use my study rooms wisely. I don’t wish it on anyone.

Spangler also plays soccer in the fall and competes in track and field in the spring. She is a soccer goaltender, registering 52 saves and nine shutouts this fall to win Division III All-State Second Team honors, All-District First Team and League First Team honors. MSL-Ohio division.

Competing in both swimming and basketball was anything but a chore for Spangler in middle school, so she decided to continue when she reached high school from CSG.

“When the question (of doing both) arose during my freshman year, I realized that I wasn’t ready to choose one over the other,” she said. “I like the two sports for different reasons. I like swimming partly for the atmosphere of the meeting and the social element. It’s rewarding because all the time and mental effort you put into it boils down to being in the pool for 1 minute 10 seconds.

“With basketball it’s a team sport, and it’s more of a mental aspect of what I’m going to do next and also running games. It’s dynamic, and one decision depends on the other.

Spangler would become an eight-time Letter Laureate over the winter, four times in swimming and basketball. She hasn’t decided to go to college, but likely won’t do college sports and could major in environmental science.

“You have to make sacrifices,” said Spangler, whose basketball team beat Buckeye Valley 34-24 on Dec. 3 in the MSL-Ohio game. “Basketball comes first because I have an obligation to my teammates. In swimming, I focus on one event, the 100 breaststroke. That’s what I can do for the championship season.

• 2021 playoffs: Third in the section, seventh in the district, did not score in the state

• Outlook: Junior O’Reilly and sophomores Hoy and Long lead the returnees. Hoy was 20th in the 100 backstroke (1: 00.82) in the Division II State competition last season. She joined O’Reilly, Long and Martin in the eighth place 200 medley relay (2: 00.4) at the district, and the three returnees joined Grieshop in the eighth 400 freestyle relay (3: 54.85).

• Quote : “We have good young children and children who are going out for the first time. We have a lot of growth potential. We also have some solid key figures that will help us. “- Sliwowski

• 2021 playoffs: First in the section, first in the district, third in the state

• Outlook: The Unicorns will rely on their depth instead of having heavy hitters like 2021 graduates Funderburke and Fortney. They have won eight consecutive Division II district titles and the same number of league titles.

Other top scorers include seniors Aslaner and Murphy and second student Schindler, who were in 20th place in the 400 freestyle relay (3: 47.18) in the state.

• Quote : “It’s a little different for us this year because we don’t have individual swimmers from all states like we have had in the past. This group is a little less experienced. If they are committed and work hard, they will be fine. But otherwise, it will be a little more difficult. Before, we could go to the States and have two daughters who would do well and we would end up in the top two. Now we have to have eight daughters to finish in the top five. If we have eight children (to be specified), we should be doing pretty well. “- Botzman