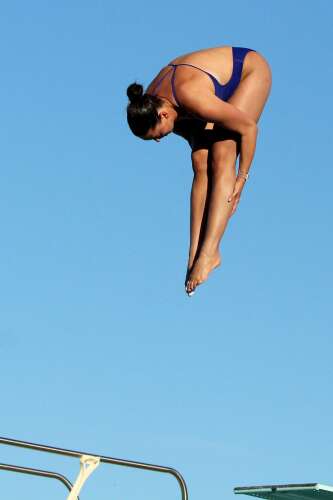 The Pomona-Pitzer Women’s Swimming and Diving Team battled their way through the NCAA Division III Swimming and Diving Championships to claim a team-best fifth-place finish with 226 points in over three decades and head coach Jean-Paul Gowdy’s best result in his career.

Among the team’s competitors was Durangoan Ruby Epstein, who became the first Pomona-Pitzer diver to compete in national championships.

Epstein qualified for the national championships with a second-place finish in the 1-meter at the regional champions of the NCAA Division III Diving Championships, held in San Antonio on February 25-26. Epstein scored 407.45 points in the 11-dive competition.

In the regional 3-metre competition, she placed 15th with 326.45 points, to also qualify in the event.

Epstein went on to become the program’s first diver to compete in the NCAA Division III Swimming and Diving Championships. The Sagehens previously had qualification for the 2020 Championships, but the event was cancelled, making Epstein the team’s first woman to take part in the event and just its second to qualify.

At the national championships, Epstein finished 26th in the 1 meter dive.

Epstein then competed in the 3-meter dive, finishing his first NCAA diving championships with 349.60 points and a 29th-place finish.

Epstein will graduate from Pomona College in December.