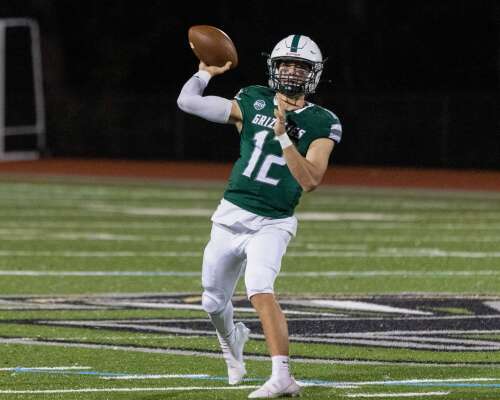 Senior Gigi Meneo and the Grizzlies are on a 10-game winning streak after picking up triumphs in each of their two contests last week. Photo by Wesley Bunnell/The Courier Photo courtesy of Wesley Bunnell

The Guilford football team secured an exhilarating 35-33 road victory over Jonathan Law in a CSC Tier 3 competition on October 21. The Grizzlies improved their overall record to 4-2 to go with a 4-0 mark in the division after defeating the Lawmen in a game that came down to the final game.

Guilford held the lead for most of the night, although Law kept coming back to stay in the game. Trailing by 2, the Lawmen drove to the Grizzlies 15-yard line in the final minutes but then turned the ball over on a fumble snap. However, Guilford couldn’t miss the time limit and had to kick the ball back to Law with just 30 seconds left in the game.

Law’s attack went to midfield for the final game of the contest. Law’s quarterback threw a through pass that was knocked down at the 10-yard line, cementing the Grizzlies’ 35-33 win. Head coach Anthony Salvati called it one of the most exciting games he has ever played.

Hilgert threw a 42-yard touchdown pass to senior Dillon Burlakoff in the second quarter, then connected with junior Brady Hallihan for a 20-yard strike in the third quarter. Junior Trevor Ridley had 2 catches for 49 yards to help Guilford’s air attack.

Senior Alejandro Colberg-Martinez led all tacklers with 9 on the night to go along with a recovered fumble in the fourth quarter. Senior Luke Carignan and fellow senior Liam Alberti had 8 tackles apiece for the Grizzlies defense.

In special teams, rookie Zisis Vasiliou went 4-for-5 on his extra-point attempts to help Guilford to victory.

Guilford will be on the road to play a non-conference game against Woodstock Academy (3-2) at noon on Saturday, October 29.

Guilford’s boys’ cross country team took second place when the Grizzlies hit the trails to compete in the Connecticut Southern Conference Championship Meet last week. Guilford totaled a team score of 81 points for the SCC competition, ranking only behind Xavier (32) for the title at East Shore Park in New Haven on October 19.

Senior Michael Masotti and junior Alex Hansen both earned All-SCC First Team honors for their performances in the conference meet. Masotti finished in seventh place recording a time of 16:44.4 for the Grizzlies. Hansen ran a time of 16:50.7 and finished in eighth place.

Junior Coleman Love made the All-SCC second team taking 15th place with a time of 17:20.4 for Guilford. Senior Ryan Franchi placed 22nd with a 17:27.3 mark to secure second-team All-CSC honors.

Next up for the Grizzlies is the MM Class State Championship game at Wickham Park on Saturday, October 29 at 3:50 p.m.

The Guilford Girls’ Cross Country Team took top honors when they competed in the SCC Championship held at East Shore Park on October 19. The Grizzlies scored 125 points as a team en route to taking second place in the SCC, finishing only behind Cheshire (64) for first place in the standings.

Guilford will compete in the MM class state championship this weekend. The state meet is at Wickham Park on Saturday, October 29 at 3:15 p.m.

The Guilford field hockey team improved their record to 13-1-0-1 while extending their winning streak to 10 games after winning both of their scheduled meetings last week. The Grizzlies picked up a lopsided victory over Shelton and then won a close fight against Branford last week to keep the good times going in the 2022 campaign.

Two days later, the Grizzlies picked up a 2-1 road win over Branford. Evans and Barlage scored Guilford’s goals in the win. The Hornets scored their only goal of the day on a penalty kick, marking the first time Guilford allowed a goal in their last eight games.

The Grizzlies will wrap up their regular season with a road game against Amity this week.

The Guilford girls’ swim and dive team took on Branford in a road meet at Walsh Middle School on Oct. 20. meet remaining in the regular season.

Guilford honored his five seniors as part of the senior night festivities for this encounter. The Grizzlies’ senior class athletes are captains Rylan Jacobson, Charlotte Martocci and Grace Young, along with Eliza Hastings and diver Ella Esposito.

The Guilford boys’ football team played three games last week and came off the slate with two wins to take their overall record to 11-2-2 this season. The Grizzlies posted 1-0 wins over Notre Dame-West Haven and Sheehan before ending the week with a loss to Xavier.

On October 17, Guilford hosted Notre Dame-West Haven and defeated the Green Knights in a 1-0 final. Junior Andres Gutierrez scored the only goal of the game in the 16th minute to lift the Grizzlies to victory. Senior Sami AbuGhazaleh got the assist on Gutierrez’s goal.

Two days later, Guilford traveled to Wallingford to play a road match against Sheehan and won the contest by a score of 1–0. Then, on October 22, the Grizzlies suffered a 2-1 loss to Xavier in a Saturday night game at Guilford High School.

Guilford host Cheshire for their final game of the regular season this week.

Guilford’s women’s volleyball team won two of their three games last week and are now 13-4 overall for the 2022 season. The Grizzlies picked up wins over West Haven and Branford while taking a loss to Morgan in a recent action.

Senior Halle Krause recorded 11 kills to go with 6 digs for Guilford in the win. Junior Emma Getrost had 5 digs and 4 kills, while sophomore Sam Alberghini finished the contest with 6 kills.

Krause dished out 13 assists and also had 11 kills in the contest. Senior Corrine Puchalski posted 15 digs with 8 kills and 3 aces for the Grizzlies.

Krause had 12 assists and 6 kills for Guilford in the win. Puchalski recorded 10 digs with 6 kills and 2 aces. Alberghini participated with 10 kills and 5 blocks on the night.

Guilford will play a road game against Hillhouse on Thursday, Oct. 27 at 4 p.m., after which the Grizzlies will host Hale-Ray for their regular season finale on Friday, Oct. 28 at 5:15 p.m.