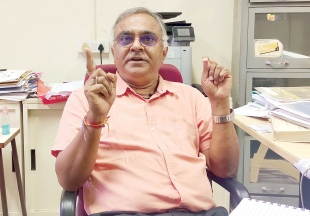 Although the impact of temperature change on land is easily determined by various indicators such as the behavior of living things, very little is known about the underwater situation.

Now, a study from the National Institute of Oceanography (NIO) in Goa has found that the variation in fish sound is directly related to the temperature change that occurs underwater.

The NIO team of scientists led by CSIR-Emeritus Scientist underwater at three shallow water sites in Goa – Off Britona in the Mandovi Estuary, on Grande Island in the Zuari, off the port of Mormugao and the Sal River off Betul.

The results were published in the Journal of the Acoustical Society of America. The study is titled Characterization of Three Shallow Water Locations Off Goa, India Using Passive Acoustic Data.

“The study results suggest that passive acoustics is an essential tool for understanding biological components in relation to environmental conditions,” added Chakraborty, who is the lead author of the study.

Underwater acoustics is the science of sound waves in water that has become an essential tool for underwater remote sensing.

“We also analyzed the nonlinearity data of hippocampal feeding clicks using the artificial intelligence method, which was published in the Journal of Acoustical Society America (American Institute of Physics). Moreover, we discovered the sound of the Great Island humpback whale (Megaptera novaeangliae) and published it in the journal Bioacoustics,” said Dr. Chakraborty. By analyzing passive acoustic recordings, it is possible to discriminate and identify different animal species and calculate the relative number of animals present in the measurement range.

Currently, the CSIR-NIO is busy acquiring and analyzing passive acoustic data with the other auxiliary systems to perform multiparameter studies.

“However, the acquisition of long-term passive acoustic data is needed to establish a link between fish sound and climate,” he said.