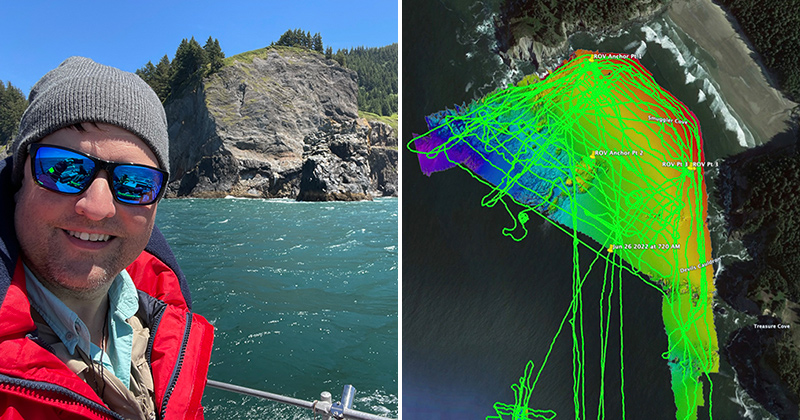 In search of the pirate ship “The Goonies”

UD Professor Art Trembanis and members of his lab have joined SEARCH2O, the maritime archeology arm of SEARCH Inc., to conduct underwater mapping of the possible locations of the wreck of the 17th-century Spanish galleon. century Santo Cristo de Burgos off the coast of Oregon.

UD helps search for wreck of Spanish galleon off Oregon

The Saint Christopher of Burgos was a Spanish galleon that sailed from the Philippines in 1693, crossing the Pacific Ocean to Acapulco, Mexico, laden with goods for trade such as porcelain, silk, and beeswax. Unfortunately, the ship was wrecked along the Oregon coast.

Known colloquially as the Beeswax Shipwreck, the ship rose to fame in the 1980s as the inspiration for One-Eyed Willy’s pirate ship in Steven Spielberg’s film, The Goonies. But while the ship may have found great popularity thanks to the big screen, its location at the bottom of the sea has so far remained a mystery.

When a dozen woods thought to come from the Saint Christopher of Burgos were found trapped in tidal pools and sea caves on the northern Oregon coast in early summer, interest in a widespread search for the wreckage was renewed.

For a week in June, University of Delaware professor Art Trembanis and members of his lab joined SEARCH2O, the maritime archeology arm of SEARCH Inc., to conduct underwater mapping of the ship’s possible locations. off the coast of Oregon. The groups were supported by the National Geographic Society and also received assistance from the Maritime Archaeological Society, which has conducted research and fieldwork in the area over the past two decades, the Columbia River Maritime Museum , Oregon State Parks, the State Historic Preservation Office, and coastal first responders. This team largely focused on the high-risk salvage of woods from caves and often dangerous tidal pools.

The green lines illustrate the coverage of the sonar survey carried out by the UD team.

For Trembanis, who grew up in the Pacific Northwest, the opportunity to seek The Goonies the wreckage was too good to pass.

“From a personal point of view, I grew up here in the northwest, and this is an area where I came in the summer. This is where they filmed The Gooniessaid Trembanis, a professor at the School of Marine Science and Policy. “Our team, the UD team, was involved in this project to map the seabed and try to find where the wreck materials came from.”

The UD team included Grant Otto and Sun Woo Park, both master’s students at the School of Marine Science and Policy, and Hunter Tipton, who earned his master’s degree at UD and now works as a marine technician in Trembanis’ lab.

Park said it was great to be part of the research team and a valuable learning experience.

“Hunter and Grant have more experience in the business than I do. Watching how they work on the boat helped me learn the ropes really quickly,” Park said. “The same equipment and methods used to researching the wreck can also be applied to other research, such as examining the properties of sediments, which is of personal interest to me. Learning the practical operations was really helpful to get a feel for data collection and meeting all the people from different backgrounds who came together for the project was very interesting.

They were invited by James Delgado, senior vice president of SEARCH Inc., with whom Trembanis has worked on numerous projects, such as the search for shipwrecks in Bikini Atoll and the search for the USS Nina.

“We knew from these projects that the art brought more than the technology – he brought his professional focus on coastal geomorphology, and he was (and is) no stranger to shipwrecks,” Delgado said. “None of this could have happened without the dedication, experience, professional expertise, academic excellence and teamwork that Art and his team brought to the project.”

Surveying an underwater wreck poses challenges all over the world, and the search for a 1693 Spanish galleon on the rugged Oregon coast was no exception.

“It can be a very difficult place to work. There are waves crashing against the shore. It’s rugged, it’s rocky and it’s high energy surf. It’s beautiful but it’s also sometimes, even on the calmest days, really fierce,” Trembanis said. “We had to familiarize ourselves with the weather and the sea conditions, and we had to familiarize ourselves with a boat that we hadn’t worked on or seen before, which is always a bit difficult.

The UD team worked from a fishing vessel known as “Spindrift” for their research cruises.

Before even arriving in Oregon, Trembanis and his lab members had to gather all their equipment, pack it up, and ship it from Delaware to the Maritime Museum in Astoria, Oregon. Additionally, they had to find a boat that would be able to take them out on the water once they arrived.

The team found a fishing vessel known as the Derivative that they could use for their research cruises. To properly survey the areas where the 1693 wreckage was thought to be located, the UD team first had to test their equipment in the area. To do this, they examined a known wreck from 1983 that had been charted in 2010 by the National Oceanic and Atmospheric Administration.

Using their equipment, the UD team was able to check if the wreckage was still there and see if there had been any movement or change in the condition of the wreckage.

“When we mapped it, we found that it was still in the exact same location as the 2010 survey had shown, but was severely, significantly, more deteriorated,” Trembanis said. “So if we see what happened to a modern steel shipwreck 39 years ago, that gives us some clues and helps us infer what might have happened to a wooden ship 328 years ago.”

This color image from the multibeam sounder illustrates the shape of the seabed.

After testing and getting familiar with the area, the boat and their gear, they were ready to look at some promising sites where the Santo Cristo de Burgos was thought to be.

While for centuries there has been onshore evidence of a wreck, there have only been limited search efforts offshore by local fishermen and archaeological groups.

“The search area for this wreck is dynamic and challenging for a host of reasons, from weather to proximity to shore,” Otto said. “Collecting high quality data in this environment was quite challenging, and we were fortunate to have an excellent captain who knew the conditions and could position the boat in tight spaces so we could do our job to the best of our ability. our abilities.”

Trembanis and members of his lab were able to use advanced technologies such as multibeam echo sounders, autonomous underwater vehicles (AUVs), and remotely operated vehicle (ROV) systems to systematically map, explore, and monitor the offshore area. .

Thanks to good weather and relatively calm seas, the UD crew was able to map a large area, as well as map some areas in great detail.

Using multibeam sonar, the team was able to map the seabed at high resolution.

“We could find something bigger than a toaster oven,” Trembanis said. “And it was just working from the surface, what we consider to be our survey of a wide area.”

Their efforts follow what is called a top-down approach: first mapping a large area, then closing in on the AUV before finally using the ROV to close in on a specific target.

This snapshot of sidescan sonar images shows the well-defined ripples and rocks on the seabed.

Each mission is unique, but for this one in particular, Trembanis pointed out that the dynamics of the coast were a big challenge, especially when working with robots.

“We’ve had big waves coming in, and for some of our robots, we’re trying to get these delicate instruments to swim up to the rocks, and the waves are dragging them around,” Trembanis said. “We were clearly not in our local waters.”

Although the search results are secret, Trembanis said he was able to verify that some previously considered targets were simply rock outcrops.

He also said that this whole mission would not have been possible without a modern team enabling great research and collaboration.

“We were working from a fishing boat and we had a really great team that was super responsive. We had many local collaborators, archaeologists and people from the maritime museum who allowed us to store our equipment and set everything up,” Trembanis said. “It really takes a team of Goonies to get a research effort like this going.”

NRL: Signs of hope for New Zealand Warriors despite loss to Parramatta Eels