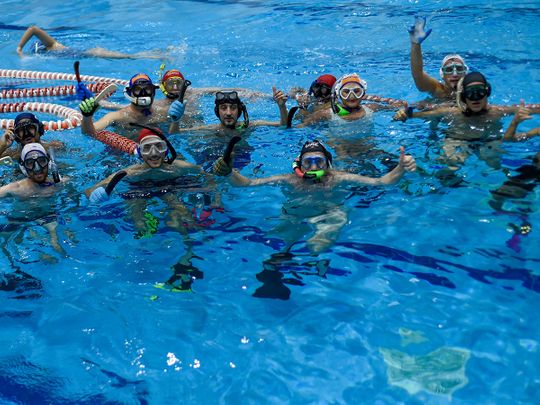 Introducing underwater hockey: the curious sport that is making big waves in the United Arab Emirates

As the Dubai Fitness Challenge draws to a close for this year and participants from across the city gear up for a final weekend of fun and fitness spanning thousands of classes and events across the emirate There is a curious sport that is starting to make waves in a big way in the United Arab Emirates.

While underwater hockey (UWH) – played by two opposing teams at the bottom of a swimming pool, trying to score goals with a puck while holding their breath – has been around since 1954, it has only recently taken root in the Arab Emirates. United.

UWH was started in the UK by Alan Blake in the 1950s and quickly spread to South Africa, Canada and Australia and by the mid 1970s it had truly global status as it became popular. in the Phillippines. As the game entered the 21st century, there were substantial changes in equipment, rules and team sizes and the game was recognized internationally by official sporting bodies – with up to 68 teams from 19 country participating in the World Championship in 2013 in Hungary.

Today, thanks to Phil Bedford, founding member and president of the Cleopatra underwater hockey team – affectionately known as the Pirates – the sport is starting to gain popularity right here in the United Arab Emirates. Based in Dubai, the Pirates started small but quickly gained a foothold and the sport has continued to develop to this day, with female members joining them and a new team formed in Abu Dhabi.

â€œWe’ve been playing the sport here since 2017 and our goal is to bring UHW to the international stage – to have the UAE represented on the world stage, where it needs to be,â€ Bedford told Gulf News. “Although we have grown up, we are still looking for children, men and women to join us and help put the UAE on the map and follow the vision of our leaders.”

One of the Pirates’ players, Mohammad Faraj, shares Bedford’s vision and expressed his passion for the addicting sport, as he explained on the sidelines of training at Springdales School in Dubai. â€œI’ve been playing UWH for three years now and fell in love with it the second I got in the water. It’s amazing, and it’s all about teamwork. Ever since I started I have always wanted to take it to the next level and bring it to schools and really involve the kids for the next generation to embrace it.

Lewis Cocks, who is part of the new Abu Dhabi squad, exemplifies the international flavor that has taken hold of the sport. â€œI was playing UWH in the UK and got involved with Phil and the guys when I heard they were playing here,â€ he said. â€œI decided I should take the game to Abu Dhabi. Fast forward a few months and I created the Abu Dhabi Ducks, our team there. We started small with a few and a lot of restrictions due to Covid, but now we’ve grown to over 30 members. Now we have the Pirates and the Ducks, we can play competitively (there was a “derby” no later than November 5th) and in the future form a UAE team and play internationally.

It’s not just a sport for men either, as hacker Charlene Aitchison explained. “It’s an amazing sport to play, especially for young girls, because I started at school myself,” South African captain Cleopatra said. â€œThe pool levels the playing field and it’s amazing because I’ve seen little girls take on grown men and thrive. It’s all about skill and not brute strength. We are currently playing mixed teams, but ideally we would like to form a women’s team and play against Abu Dhabi.

Considering the interest and growth of UWH in the UAE in just a few short years, and plans to move it forward through Bedford and Co, it is sure to make more noise in the future.

What is underwater hockey?

Underwater Hockey Underwater hockey is an internationally recognized limited contact sport in which two teams compete to maneuver a flat, round puck from the bottom of a pool to the opposing team’s goal by propelling it with a small hand stick called a “pusher”. Players are not allowed to use breathing apparatus such as scuba tanks and use snorkels while holding their breath and fins to help them maneuver.

Who let the dogs out? A deep dive in shore diving – SUPicket