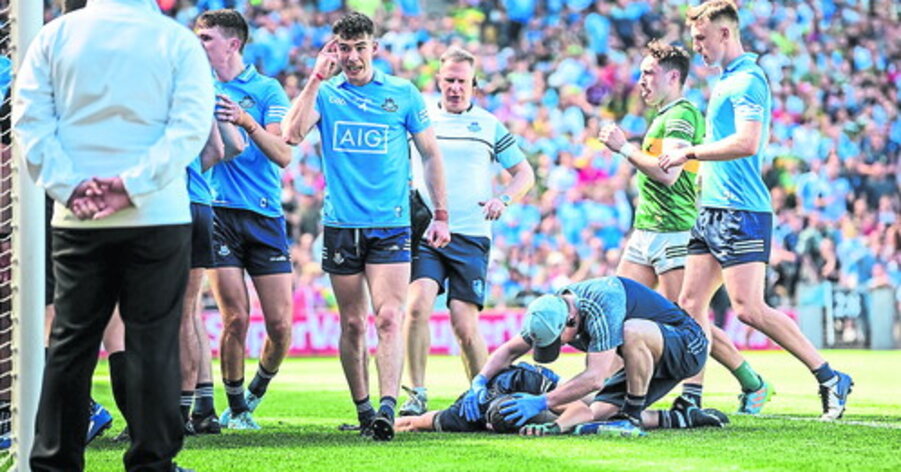 Kicking Out: We Can’t Let Dive Culture Down

KICK on wood, and I know you should never say this, but I can only remember being sick once in my life.

The only time I threw up was maybe when I was P4. The mum had picked me up from school and on our way to The Town (Dungiven) I couldn’t keep it up and was sick on the floor in the back seat.

Apologies if you are at your breakfast.

The downside of never being sick was that you never had a day off from school.

Overaction was the easiest diagnosis for a skeptical mother. A grimace squeezed this little piece too tightly. Not knowing where the disease was and what she felt. A timely cough when it was supposed to be a stomach ache. The Amateur Dramatic Society didn’t know what they were missing.

There is a famous story in our house. Jonny, one of the younger siblings, tried to pull a sick man one morning. No one was really buying it, but they weren’t sure.

Jonny was into music. Always had a guitar. Lying on his stomach in bed, apparently unable to move, the guitar was produced and a song request was made as a method to verify the legitimacy of this mysterious disease.

Standing, he jumps out of bed and takes the instrument in his hands. Two notes later, it’s too late to go back. At school, my boy.

In a word, we weren’t good actors.

So believe me when I tell you that I know what bad acting looks like.

In the age of statistics and precise measurements, this would be an interesting study detailing the proportion of head injuries suffered in the last 15 minutes by the winning team of a game.

There also seems to be a direct correlation between mystery head injuries and black card spells.

You can understand why referees hate to ignore falling men holding their heads. The welfare of the players must be protected at all costs, and it must be seen to be protected.

There are enough unseen collisions in a match to make it difficult for officials to deliver a verdict which they believe could have dangerous consequences.

It’s safest to go in and check the player lying on the ground, let the medics take care of them, then add the time at the end.

The problem is that everyone is now playing on it.

We are at the stage of diving into Gaelic football which triumphs because no one really talks about it anymore. No one dares to broach the subject because of the dangers associated with head trauma.

What we have is not a growing trend, but an established trend that dates back several seasons.

Nothing is sacrosanct when it comes to our ability to bend the rules.

Referees became aware of traditional time-wasting efforts and started telling players to get up or goalkeepers to throw the ball. Lazarus became an ineffective player when this happened.

So the coaches got smarter. What two things would prevent a game from restarting? Head injuries and goalkeepers.

There is one particular inter-county goalkeeper who would like to have a word with his optician. His contact lenses keep falling out at the most inopportune times, like when his team has just conceded two goals in a row, or when there are three minutes left and his team’s lead is reduced to two points.

Eagle-eyed watchers would notice that this never really seems to happen when there’s a game to chase.

Referees must do more than stand with both arms the same length.

A nation saw Evan Comerford fall to the ground after Dublin gave away a penalty against Kerry.

It was exactly seven minutes before Kerry got the free kick until Comerford took the free kick which resulted from Sean O’Shea’s frustrated swing on the rebound.

With absolutely no one near him, Comerford lay down holding his head 35 seconds after the penalty was awarded. Then the Dublin physio stretched his right leg! It took three and a half minutes for O’Shea to be cleared to take the penalty, followed by exactly the same amount of stoppage time after the rebound, as there was more legitimacy to Comerford’s spell on the ground.

The first one was outrageous but everyone is walking on glass around it, afraid to say what they know they have to say because of the very real threat of a real head injury.

It’s debatable whether time is returned (Paddy Neilan added six minutes in the first half in that game, despite that incident taking seven), but what certainly isn’t returned is the momentum.

In a recent club match I watched online, an example stood out a mile away.

You could see the player in question from start to finish on an attack. He made no contact with anything or anyone. The opposition were on the run and kicked the score.

The wily defender didn’t even do it right away. He waited for the goalkeeper to have the ball in hand. Then, out of nowhere, he drops to his knees, clutching the side of his head. Game stopped, physio activated.

It happens every game now, guys coming out of nowhere holding their heads.

When someone is seriously injured in a football game, everyone knows they are seriously injured. The crowd knows it, the opposing players know it and the referee knows it. We’ve all been in situations where you call the referee to stop play for an opponent because you know it.

But if there is cynicism to apply, then Gaelic footballers will find ways to apply it.

It has become so common now that the situation really needs to be brought under control.

The first is to let the doctor enter the field and attend to injuries while play continues.

The other is to once again borrow from football by forcing anyone who receives treatment off the pitch and not being allowed to return until the next break in play.

The Law of Unintended Consequences could decree that teams could be punished somewhere down the line by losing a man to a legitimate injury, where the opposition scores a goal when he is off the field.

What other options are there, though? Allowing the last 20 minutes of a game to descend into farce by men lying down holding their heads?

We become like them. We’re almost worse than them, actually.

The guys are not going to just stick together and stop this. He’s at the stage of needing a deterrent.

Like Jonny and the guitar, paying the price might make some boys think twice about lying down.