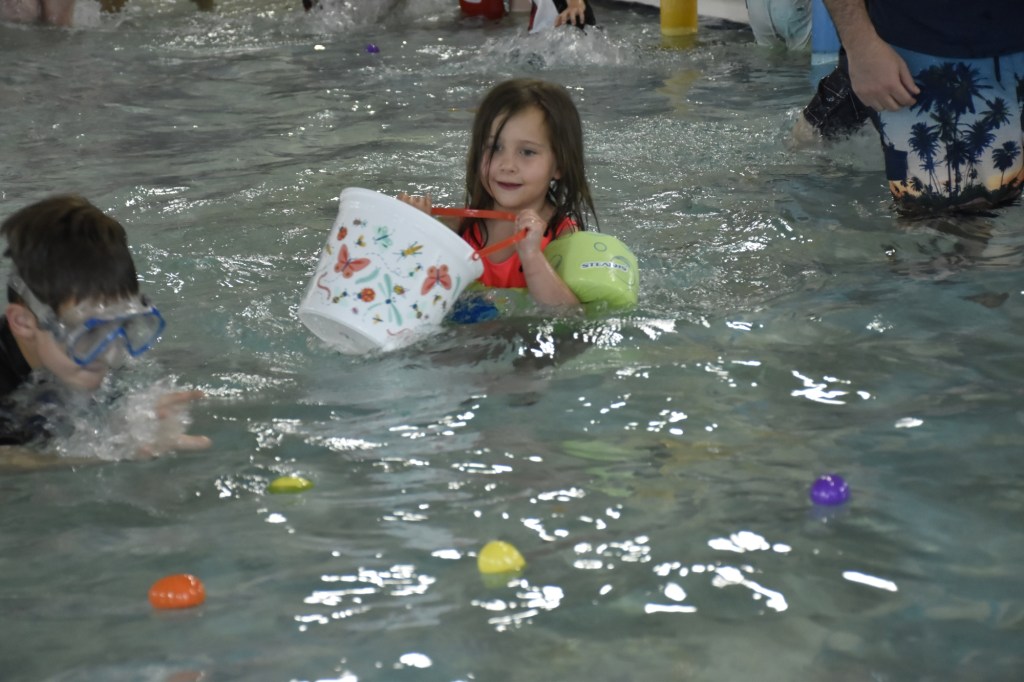 From the lobby of the Longmont Recreation Center, the children looked out the windows at the pool on the other side.

Spooling across the surface of the water and drifting along the bottom of the pool were 1,500 colored eggs, some containing grand prize tickets.

As 4 p.m. finally rolled around, the children lined up by the pool, goggles fixed, and took a final moment to strategize, indicating which treasures they would seek out first.

At the sound of a whistle, they cannonballed, swam and waded through the water to claim their prizes.

The colorful display marked one of the Easter Bunny’s cleverest ways to hide treasure: in an annual underwater Easter egg hunt.

Longmont Recreation Area Supervisor Jason Stolz said the 3,000 eggs scattered over two hour-long hunts were filled with toys and surprises for the kids. There were lots of eggs in the shallowest part of the pool, as well as whirlpools in the deeper areas like the lazy river and the water under the slides.

“It’s the first year since COVID-19, so we’re going to do it all this year,” Stolz said.

Stolz estimated that there were around 300 participants between the two hunts, with children up to 16 years old involved.

A total of 12 shiny golden eggs were also in the mix and contained a ticket allowing children to claim an Easter basket, containing items like a soccer ball or a stuffed animal. The Easter bunny also visited the pool on Saturday and children were invited to have their picture taken with the hare.

Jillian Craft, from Erie, leaned over the edge of the pool, handing an Easter bucket to her daughter, Riley Craft, 5, to lay eggs in. This is the second year that she has taken her daughter on an underwater egg hunt.

“Kids love getting in the water and catching eggs,” Craft said. “It’s a fun twist.”

Riley took the time from her research to give a reporter an inside scoop on why egg hunting was fun for kids.

First-time underwater egg hunter Everett Kittman scrambled out of the water with another pile of eggs to add to his growing dozens. He created a makeshift nest out of a towel to store his prizes.

Everett, 9, said he really enjoys swimming and hunting for colorful treasures, noting that some of the eggs float on the surface of the water, while others sink to the bottom of the pool.

“We just wanted to do something outside of the box,” Stolz said. “We love Easter egg hunts in the fields, but we really wanted to bring them home to the aquarium and poolside atmosphere for the kids to have fun…and get some great price in a different environment.”