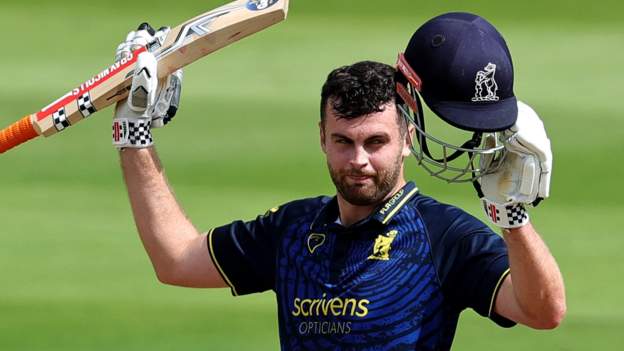 One Day Cup: The group stage prepares for a dramatic final day after a stunning Sunday

The final day of a thrilling One-Day Cup group stage will see 11 teams battle it out for just six places in the Round of 16.

Gloucestershire’s five-wicket win at Middlesex on Sunday means four teams enter the final round of fixtures on Tuesday with 10 points in Group A.

First place in either group ensures an automatic place in the semi-finals.

Wins for Warwickshire, Yorkshire and Hampshire mean 11 teams still have hopes of a quarter-final in both groups.

Elsewhere on Sunday, Warwickshire’s win over Durham means the top six in Group A are separated by just two points going into the final day, knowing that three of those six will miss the knockout stages entirely.

In Group B, Hampshire’s three-wicket victory over Essex puts them in pole position for a direct route to the last four. Essex, however, can no longer make the round of 16.

Hampshire can secure top spot with a win over Yorkshire in their final group game at Scarborough, and if they do it would open the door for Kent and even sixth-place holders Glamorgan to reach the quarters of final.

Yorkshire boosted their chances of a knockout tie by edging victory in a low-scoring game against Derbyshire at Chesterfield by just one wicket on Sunday afternoon.

Gloucestershire stayed alive in the quarter-final race with a fine five-wicket win against middlesex in Radlet.

After meeting at 19-2, Pieter Malan and Sam Robson put in 125 for the hosts’ third wicket, with Malan reaching 81 before becoming the final victim of Zafar Gohar in his 4-38.

Robson recorded a fourth consecutive half-century, making a solid 59, but Martin Andersson (31 not out) was the only other notable tally.

Ajeet Singh Dale took a superb diving hold on the thin-leg boundary to oust Max Holden, then claimed his first List A wickets in the closing overs as the hosts went 256-9 from their 50 overs.

Gloucestershire made a superb punch of their response thanks in large part to Ben Charlesworth, who fell to Andersson just three points from scoring a first List A century.

Charlesworth and Marcus Harris (57) put in 141 for the second wicket and, despite losing a flurry of wickets, Jack Taylor’s unbeaten 48 and 23 not out of Gohar saw the visitors cross the line with 17 balls in hand.

Dom Sibley hit a superb century as Warwickshire kept alive their chances of a place in the Round of 16 with a 48-point victory over Durham in Edbaston.

The former England right-hander went 98 for the opening wicket with Rob Yates (52) and the score was 232-2 when he fell to Oliver Gibson, the Durham bowlers’ choice with 3-55.

The hosts eventually posted an imposing 275-6 and then took wickets at regular intervals in response to keep the visitors at bay. Graham Clark provided the only real resistance with 70 and when Oliver Hannon-Dalby (4-39) had the dangerous George Drissell caught by Sibley for 37 the game was over as the visitors lost their last four wickets in space of 17 balls.

yorkshire kept their hopes of a place in the quarter-finals alive with a resounding one-wicket victory at derbyshire.

After placing the hosts in Chesterfield, Yorkshire took charge of reducing the hosts to 28-3 in the 12th. Harry Came trailed to make 19 from 87 but none of his team-mates were able to top and the hosts went 105-7 down to 109 with over seven overs to spare. Jack Shutt claimed 2-5 while Ben Coad went 2-15 from his 10 overs.

There was plenty of nerves as the visitors were down 37-4 in response, with Sam Conners striking early on his way to 5-28 numbers. However, Matthew Waite’s quickfire 23 and George Hill’s more stoic 21 on 48 balls sent them to the finish line.

When Hill was the eighth man to go for his side, he still needed nine runs, but although Coad followed him to the clubhouse with the scores tied, Harris Sullivan hit the winning run in the 32nd.

This victory, combined with from Hampshire narrow victory over Essexsaw Yorkshire edge past Essex to third in the table heading into the final day.

After winning the coin toss at the Ageas Bowl, the visitors raced out of the blocks to go 44-0 in six overs, but were 48-3 shortly after and limped to 134-7.

It took Shane Snater slamming 64 better than a run-a-ball and putting in 96 for the eighth wicket with Jamal Richards (31 not out) for Essex to go 257-8, with Ben Allison cracking two sixes in an undefeated end 21.

Hampshire lost for the first time in 14 matches Friday and were in no mood to let that happen again as Tom Perst paced the response superbly with 76 out of 104 deliveries.

Despite Snater’s 3-46 with the ball, Toby Albert’s swashbuckling 34 in the final 10 overs helped keep the target close and Ian Holland (21 not out) found the ropes three times in a row to see Hampshire home with three wickets, and 10 balls to spare and end Essex’s hopes of a knockout tie.