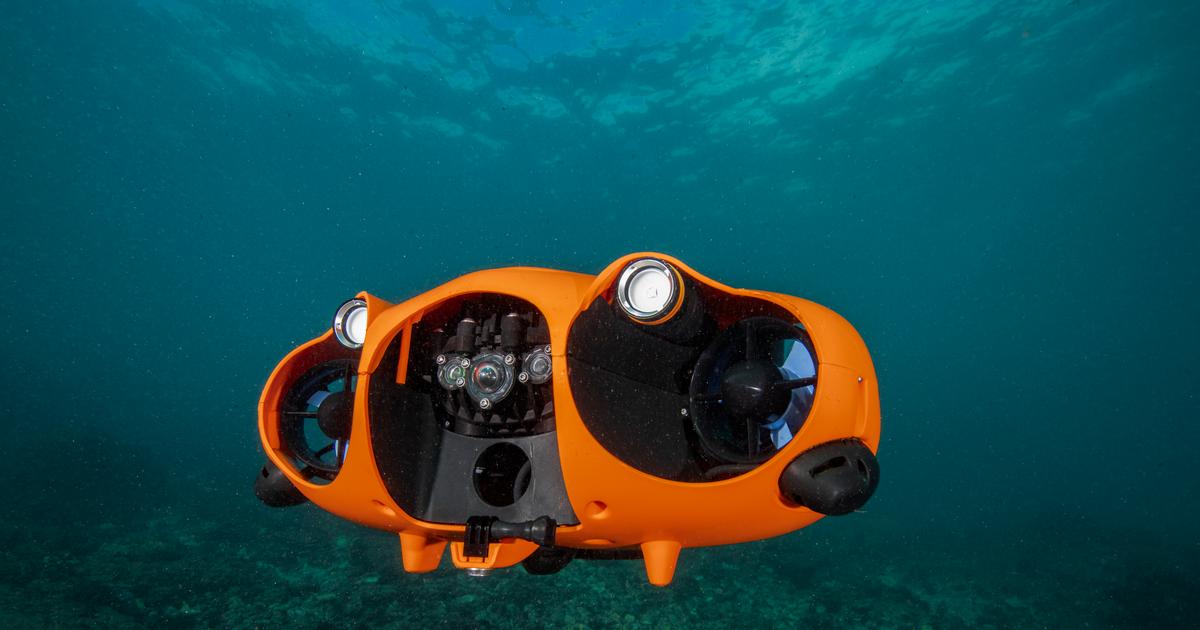 In 2016, we told you about the iBubble, an underwater drone that autonomously tracks and films divers. Well, it now has a more capable industrial use big brother known as Seasam.

Made by French marine technology company Notilo Plus, the Seasam first hit the market in 2019. That said, it recently caught the eye when it was featured in the horror movie. The deep house, in which a couple of divers explore an underwater haunted house… and yes, that is kind of a cool premise for a movie.

Like the iBubble, the Seasam is able to wirelessly track and shoot HD video footage of its scuba diving user. It does this via a combination of acoustic and computer vision technologies.

At a distance of up to several tens of meters, it is capable of picking up the acoustic signals emitted by a control unit worn by the user. This allows it to find the person even at night or in low visibility conditions. Once it gets close enough, the drone uses its built-in 1080p/30fps camera and visual recognition system to actually spot the diver – it can then keep them focused and centered in its shot while it dives. move with them. In doing so, it uses its own sonar system to detect and avoid obstacles.

The control unit is also used to send acoustic signal commands to the Seasam. Although the user cannot actually steer the drone, they can adjust their follow distance/angle, turn on their lights, and start or stop recording. Additionally, they can configure it to move in front of them (so they or they to follow this), circle around them while they’re stopped, stay in place while they walk away, surface on their own, or approach them so they can grab it and point it manually to what they want to shoot.

Like the iBubble, the Seasam can be operated remotely from the surface by plugging it into a long coiled communications cable. The user then uses a portable remote control equipped with a tablet to direct him and to view his video in real time. Via the same visual recognition technology it uses to track divers, the Seasam (but not the iBubble) can then be instructed to guard targets such as ship hull sections, dock piers or structures beneath. -marines centered in his shot as he moves around them – or with them, if they are mobile.

In the case of the Seasam, another remote control option is to use a motorized miniature surface vessel known as the Navigator. It is connected to the drone via a shorter cable and communicates wirelessly with the operator via Wi-Fi. This means that the cable only needs to be a little longer than the required diving depth of the drone, instead of quite long to stretch to the shore.

Additionally, since the navigator is able to determine the Seasam’s underwater location relative to itself, it is able to provide GPS coordinates of anything spotted by the drone.

As for the basic specifications, the Seasam is equipped with seven thrusters; has a maximum diving depth of 100 m (328 ft) (iBubble is rated at 60 m or 197 ft); can run for 1.5 hours per 2.5 hour charge of its removable 6600mAh lithium-ion battery; weighs 9 kg (20 lb) out of the water; and uses two integrated 1000 lumen LED spotlights. Unlike the iBubble, much of its hardware and software is upgradeable – for example, it can be fitted with a 4 hour battery, 4K camera or 10,000 lumen lights, and it has top mount for third-party sensors and other devices.

By day – Notes on nature: the crested merganser makes the shaggy coat spectacular