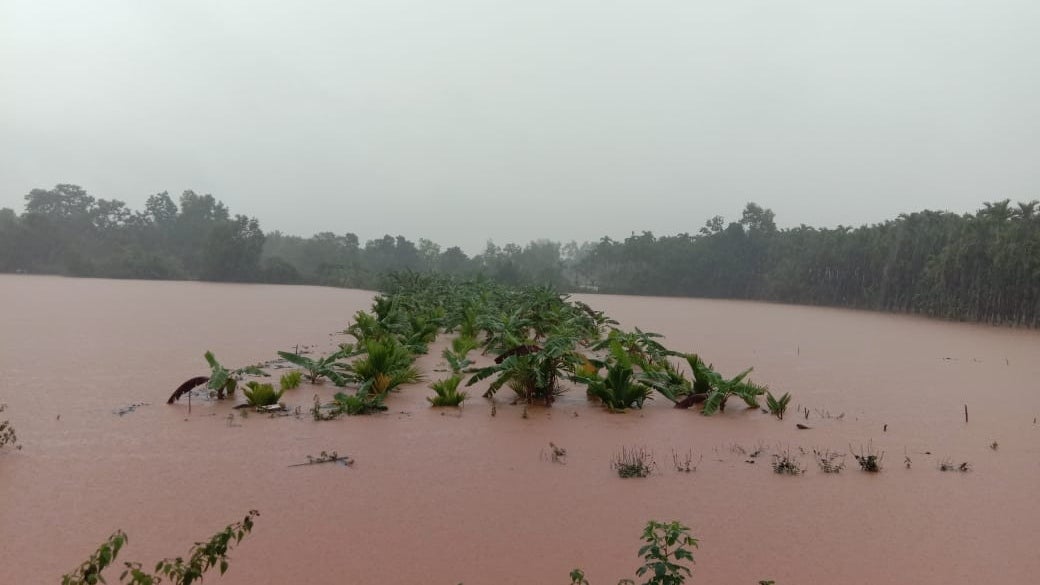 The Indian Meteorological Department (IMD) has predicted rains for another two days across Karnataka. The coastal districts of Dakshina Kannada, Uttara Kannada and Udupi have suffered heavy losses due to incessant rains in recent days and have been on orange alert since Thursday.

Due to heavy rain, the memorials in Hampi – a UNESCO World Heritage Site – were flooded. The bridge near the Tungabhadra river which was built during the era of Vijayanagar kingdom, Purandar Mantap, Vidhi Vidhana Mantap, Rama Lakshmana temple and Chakrathirtha bathing area were also flooded in Hampi.

Shivamogga, Kodagu and Chikkamagalur districts are on orange alert while Hassan district will be on yellow alert for another five days. The North Karnataka districts of Kalaburagi, Vijayapura, Belagavi, Dharwad, Gadag and Haveri were also given the yellow alert.

The Cauvery River which originates in the Kodagu district has crossed its danger level. The water level of Tungabhadra Dam in Koppal district is steadily rising. Water was released from the reservoir through the 30 gates in the crust. The influx of water has increased due to heavy rains in the malnad (hilly) districts of the state.

Authorities breathed a sigh of relief as rainfall decreased in the Kabini River region. The situation in the border district of Belagavi has turned grim with the overflow of the Krishna River and its tributaries Veda Ganga and Doodh Ganga. Authorities are concerned about heavy rains in neighboring Maharashtra which could lead to flooding in the Krishna River in Karnataka.

Karnataka Chief Minister Basavaraj Bommai said on Wednesday that heavy rains in the recent past have claimed 32 lives in the state. “5 people are still missing and more than 300 people have been evacuated to safety amid landslides and flooding,” he added. He also released Rs 500 crore for the restoration of crucial infrastructure in the state.

The above article was published by a news agency with minimal changes to the title and text.

Guy Fieri is back in New Jersey for dinners, drive-ins and dives