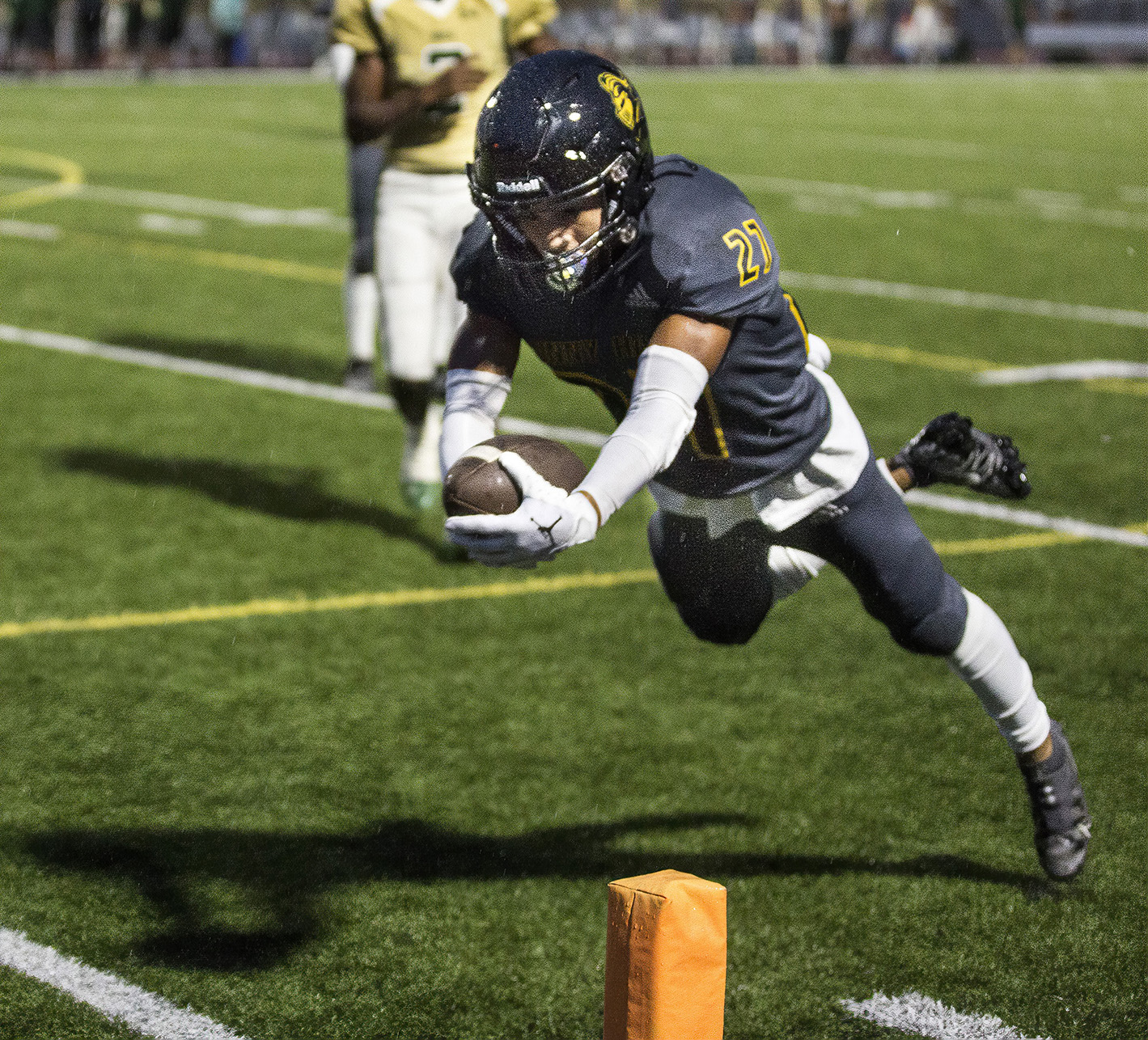 Larry Alvarez II had a nickname before he even started a game for Sunny Hills and by the time he finished leading the Lancers to their first win of the season Friday night, 16-0 over Brea Olinda, he had two.

“We call him Larry Dimes,” David Wilde said after the Lancers (1-2) handed him his first win as Sunny Hills head coach.

He earned this nickname from former Lancers coach Pete Karavedas playing on the JV team last year. As a defensive lineman he intercepted a pass and scored a TD and as a quarterback he threw two touchdown passes, which Karavedas dubbed “a dime”.

But when Alvarez avoided giving the ball to others while running Sunny Hills’ double-wing offense and took off for himself a few big runs, his teammates started calling him “Larry Carries.”

Sunny Hills quarterback Larry Alvarez II is welcomed on the sidelines after a crucial first down.

That fourth pass in the end zone was just beyond the
at the fingertips of Roman Remaz de Brea-Olinda.

The area received 0.33 inches of rain on Friday, double the historic monthly average for September.

Matthias Brown’s right foot played a big part in the
Lancers victory, with a field goal (36 yards), an extra point and punts and kickoffs in full swing.

The Brea Olinda cheerleaders support their team in the rain.

Lancer running back Nathaniel Lee slips a tackle on a 3-yard run in the fourth quarter.

Friday’s victory was David Wilde’s first as a Lancers coach.

Sunny Hills fans, left to right, Elaine Chung, Hannah Won, Olivia Lee and Audrey Jeon were ready for the game and the rain.

Dancing in the rain, the Sunny Hills dance crew performed at halftime.

The Sunny Hills video team made every effort to keep their gear dry while filming the match. From left to right, Frank Lopez, Landon Klepper, Grace Spero, Julia Brown and Luke Lawrence.

The majority of Alvarez’s opportune runs came on the Lancers’ second successful drive of the night, an 80-yard long drive that ended with Nathaniel Lee’s three-yard run and a 16-0 lead with five. minutes to play.

Brea Olinda’s young side, who had several missed chances earlier in the game, responded with their own strong will, driving deep into Sunny Hills territory before an errant cross slipped past the Wildcat quarterback Cullen Doyle and was picked up by Sunny. Irons Connor of Hills.

The loss was the first in three games for the young Wildcats team.

Sunny Hills scored in the first quarter, needing to go just 32 yards after Cole Dunkleberger intercepted a pass from Brea. Johnny Ramirez dove into the end zone from five yards out.

If anyone else on the Lancers team deserved a nickname, it might be kicker Matthias Brown, aka “Big Foot.” Rally problems and an untimely penalty cost the Lancers two kicking chances, a field goal and an extra point.

But Brown, who was CIF Division III Player of the Year in the spring after leading the Lancers to a CIF football title, threw a PAT and field goal for 36 yards. More importantly, his kickoffs and punts put the Wildcats at a disadvantage when it came to home court possession all night.