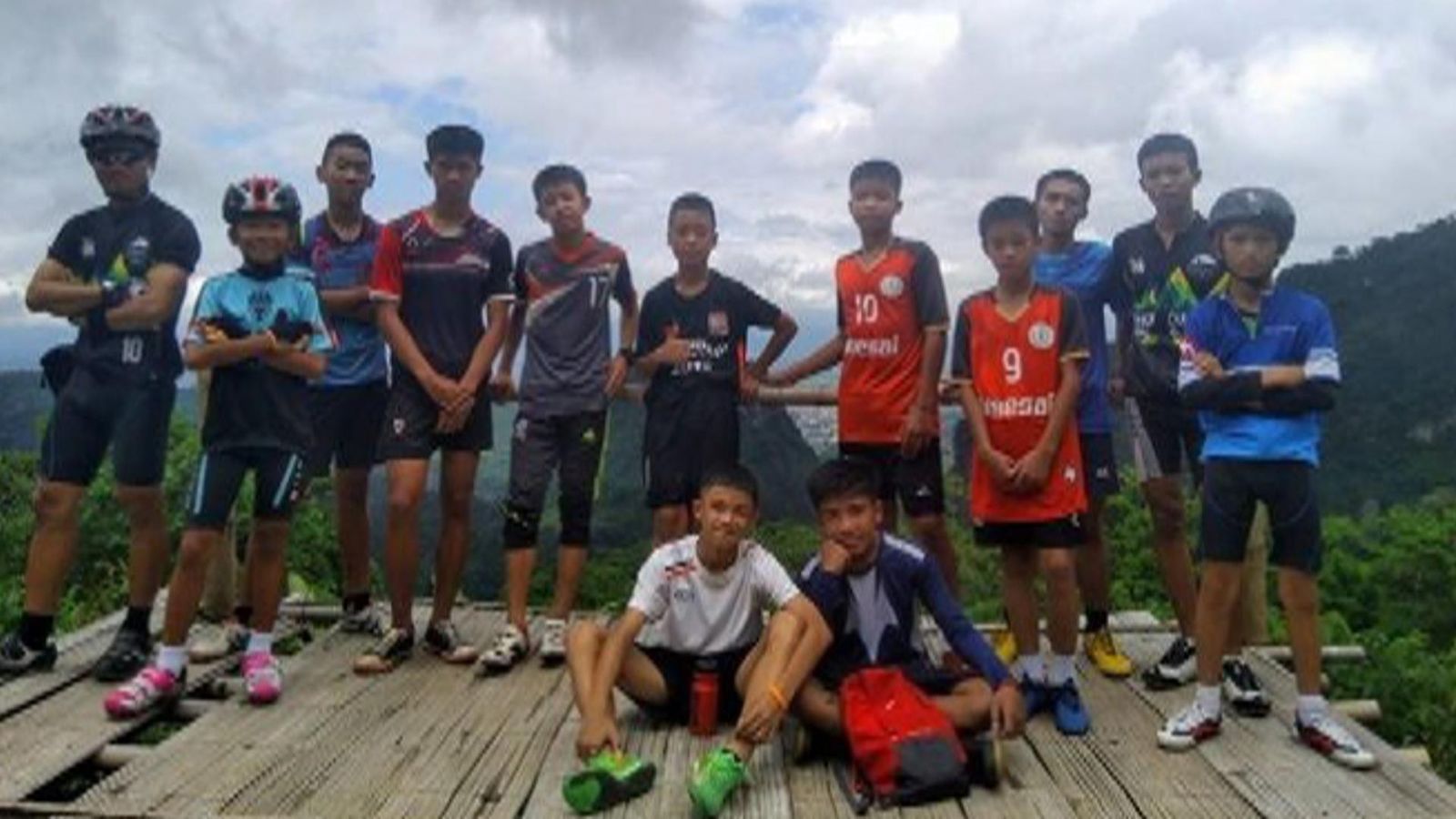 It was the evening of July 2, 2018 when British divers Rick Stanton and John Volanthen emerged from the cloudy and humid monsoon rainwater that had flooded Thailand’s Tham Luang Nang Non cave system, immediately realizing that they had found what they were looking for.

Twelve young soccer players and their coach had been trapped underground about two kilometers in the cave for 10 days at this point, and Stanton and Volanthen had both mentally prepared to find bodies in the water.

But one by one, the torchlight of the divers slowly made out 13 desperate faces in a pitch black chamber. â€œThank you,â€ the exhausted boys can be heard saying to the couple, in footage that was then released around the world. “Thanks thanks.”

This hugely moving scene is one of many dramatic moments featured in The Rescue, a new National Geographic documentary that tells the unexpected story that swept the world in 2018. It turned out to be part of it. hours of footage, the majority of which had been kept locked up.

â€œWhen I first started filming, I was literally trying to capture the faces of the boys who were still alive so that we could determine which ones hadn’t survived,â€ Volanthen said, speaking to Sky News alongside the co-director of the documentary Elizabeth Chai Vasarhelyi. , about when he and Stanton found the boys.

â€œBut as we continued to count and film it became clear that we were down to 13 and they had all survived. I just couldn’t believe it. The situation looked incredible, that they had found something. part out of the water, they had looked one after the other and although they were weak, they were in such a good mood. “

Millions of people followed the headlines as the story unfolded, but with tales from the divers, Royal Thai Navy SEALs, and U.S. Special Forces personnel who also worked on the operation, The Rescue really gives a sense of the enormity of what has been accomplished. to get the boys out, that there was more to it than even the reports of a transmitted “miracle”.

It’s a story of “great decency and great moral courage, â€says Vasarhelyi, a story of the risks some people are willing to take to save a life.

Stanton, Volanthen and a group of other cave divers, including several from the UK, were called in because they are the best in the world, a group of people with a unique skill set that even Navy SEALs – used to diving, yes, but in open water – did not have.

The documentary shows the team being put together, presented as a motley bunch of misfits, almost, who didn’t quite look the part, but slowly managed to convince authorities that they were the best people for it. work ; almost like Bruce Willis and his oil researchers sent into space to stop the asteroid in Armageddon.

But cave diving wasn’t a job, it was a hobby. Although Volanthen had been involved in rescues, even recovered bodies before, he had never done anything like this.

Finding the boys turned out to be the easiest part of the mission. Now they had to figure out how to get them out – and there was no way they could make the two to three hour trip underwater without panicking.

After giving the boys a motivational speech to keep their spirits up, Volanthen and Stanton had to leave them behind to come out and share the good news that they were all alive – and figure out what to do next. â€œI made them a promise that I would come back,â€ Volanthen said. “Rick thought it was pretty reckless at the time, but I really meant it.”

Several options were discussed by the authorities on the surface. Could a tunnel be dug in the cave? Could they wait about three months until the end of the monsoon season?

But the decrease in oxygen meant that the rescue had to be done quickly. And the only way to do that, Stanton concluded, was to sedate the boys and their trainer. The magnitude of that decision – ultimately reluctantly accepted by Australian Richard Harris, another of the cave divers who was also a doctor – is hard to understand. Nothing like this had never been attempted before.

“None of the options were good”

The documentary features never-before-seen footage of the rescue that Vasarhelyi and her co-director, her husband Jimmy Chin (they are the team behind Oscar-winning Free Solo) fought to include. After negotiations, they managed to secure him, believing they would have about an hour to see. In fact, there are 87 hours of footage out there.

â€œUntil you see someone tie a child’s hands behind their back and tie their feet together and push their head underwater, you know, that’s when emotional gravity and the stakes of this [the divers] were really trying to get home for me, â€says Vasarhelyi. The images also show the final stages of each child emerging from the water, with hundreds of people supporting the effort to get them out of the cave’s mouth.

“[When] you see 200 people pass a child and you see the face of the child under the mask, it shows very clearly the scope, size and scale of this rescue and how and why you needed so many people to support these 10 divers, and how so many different people came together to accomplish this impossible task. “

The boys and their trainer were given a combination of Xanax, ketamine and atropine. Dr Harris had no idea if this was going to work. But that was their only option.

â€œNeither option was good, but that’s what we were faced with,â€ Volanthen explains. â€œI was incredibly uncomfortable and would have liked, if I’m honest, to abdicate responsibility. But I really felt that Rick, myself and the rest of the dive team were probably proposing the best option for the life of children.

â€œAt the time, I didn’t expect to be 100% successful; I think it was the US military that said if we saved one in 13 it would be considered a success. continued with the same process, without success. But it gives an idea of â€‹â€‹the unusual nature and gravity of the situation. “

Telling that part of the story was bittersweet, Vasarhelyi says. â€œDoctor Harris, he would never practice again if he killed one of those kidsâ€¦ and he was fully aware of the psychological risk everyone was. But it was the right thing to do to try because that they really were the only people in the world who could. “

“Being afraid is not a bad thing”

The divers were each assigned a boy to pass through the submerged tunnels of the cave system. The film shows how dangerous and uncertain the rescue was – one diver even stabbed himself with a ketamine syringe, which luckily was not connected.

They are all used to being in confined spaces underwater and appear calm and realistic. A diver at the end explains how the documentary shows that being emotionless can be a good thing. But Volanthen says that didn’t stop them from being afraid when they had other lives to consider.

“I was scared every second I held the boy underwater. There was no doubt I was scared from the second we submergedâ€¦ until the second we handed the boys over to the water. the US military and asked the question, “Still breathing, isn’t it? ‘Yes.’ Maybe the risk to our lives was something we are used to, maybe not extraordinary, but the risk to the boy’s life … each of those boys, they were in mortal danger every second that they were underwater.

â€œSo I was very aware of my responsibility. And being afraid of something is not a bad thing because that fear can be awareness. If you weren’t afraid for the safety of this boy, then something was wrong. And we were all just as diligent and all equally able to get these boys out in the end. “

Vasarhelyi went to Thailand to see the cave itself. Although their accounts do not appear in the film, she also encountered some of the boys during her research.

â€œIt was a very important experience for me to be able to walk in the cave and understand again the scale of the operation, and also understand how enchanting the cave is,â€ she says. â€œI know exactly why these boys went there. It’s fun, it’s a great adventure. And it was like their backyard.

“I was left with this kind of anecdotal impression of the kids where they talked about how they would play a role [while they were trapped in the cave] and pretending to be parents to each other when they really missed their parents, and it brings tears to my eyes every time.

“These kids are very strong. I mean, they’ve had tough lives. And I think that certainly contributed to their ability to survive.”

National Geographic Documentary The Rescue Is Now In Theaters

This is what an underwater pumpkin carving competition looks like