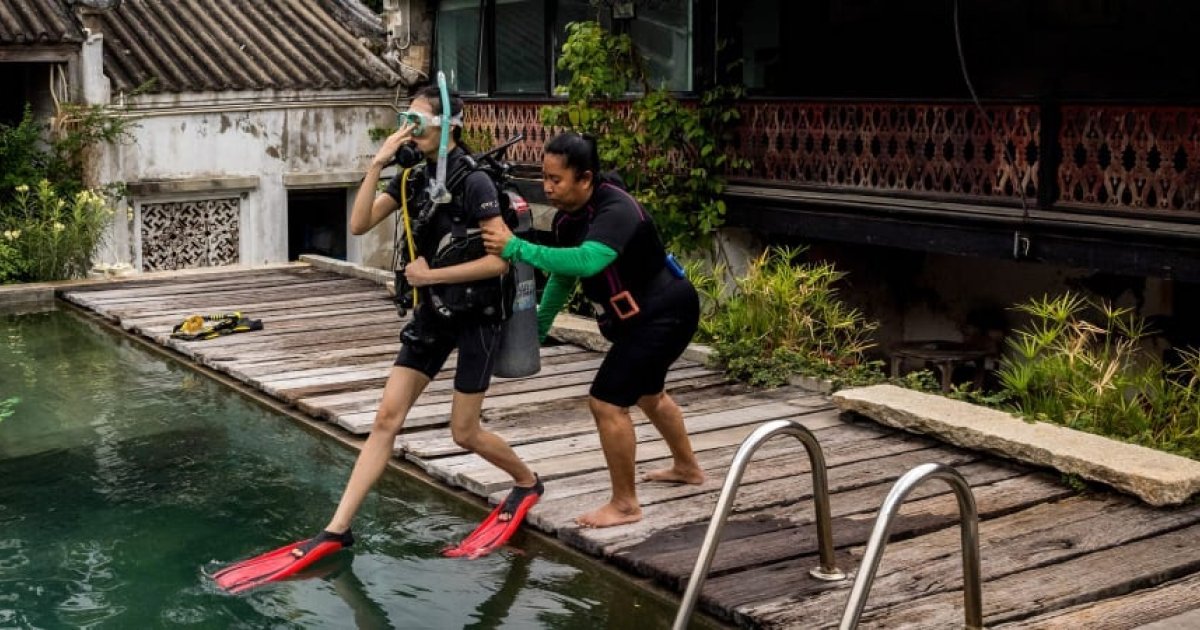 BANGKOK, March 12 ― A 200-year-old Chinese mansion in the heart of Bangkok isn’t an obvious spot for a dive school, but in a city that relentlessly tears down its architectural heritage, the company is helping to preserve the historic home .

Dive instructor Poosak Posayachinda’s family has owned the traditional, teak-walled So Heng Tai for eight generations, but lives largely on their decision to convert it into a diving academy.

The survival of the building, originally built as a home and office for the family business trading bird’s nests with China, is a rare achievement in a town that harbors few feelings – or legal protections – for historic architectural gems.

The city’s frantic reinvention in recent years has seen gleaming malls and flashy condos soar, and buildings like the art deco Scala Cinema and the 1920s British Embassy crumble.

Thai law only protects properties over 100 years old, and political enthusiasm for saving ancient architecture at the expense of profitable development is limited. For families with historic properties, annual maintenance costs can be a huge burden, according to historian and archaeologist Phacha Phanomvan.

“We don’t have a lottery fund or a trust that comes to save heritage,” she said. So in 2004, Poosak installed a four-meter-deep swimming pool in the courtyard of So Heng Tai, subsequently teaching more than 6,000 students. The diving school has helped pay the maintenance bills for the property, which Poosak estimates at US$25,000 (RM104,823) a year, but upkeep is difficult.

“On a rainy day, you find a lot of water points. Sooner or later we will have to redo the whole roof and that is a lot of money,” Poosak said. AFP.

While the Ministry of Culture maintains a national heritage database, Phacha said many properties are unregistered and fall through the cracks. “For individual owners without state aid… it is better for them to sell the property.

Sell ​​the individual building, then sell the (land),” she said. Adding to the challenge is a growing market for collectors of teak from Thai wooden houses, she said – some are even being dismantled, moved and reassembled to become boutique hotels elsewhere.

“You want to keep these properties where they are… You’re essentially depriving Bangkok of its (history),” she said. Photographer Ben Davies spent five years documenting the neighborhoods for his book ‘Vanishing Bangkok’, an experience that left him despondent.

“Something like (30-40%) of the buildings and communities I photographed had either disappeared or changed almost beyond recognition,” he told AFP. And in the rush to expand, Davies says it’s unclear how much of Bangkok’s heritage will remain in a decade.

“I have the horrible feeling that one day Bangkok will be, apart from its temples and its few palaces, (a) unrecognizable but (b) has lost so much of its identity and its character that it will look like n ‘any other megacity in Asia,’ he said.

A glimmer of hope ?

Elsewhere in the region, Thailand offers possible solutions, notably Singapore which has been hailed since the late 1980s for its heritage protection efforts. Its strategy looks at the whole city-island holistically, with conservation going hand in hand with planning, says Yeo Kang Shua, an architectural history expert at the Singapore University of Technology and Design.

The program is based on the principles of the “three Rs”: maximum conservation of buildings, sensitive restoration and careful repair. “In the 1980s, many property owners considered it a death sentence for their properties to be given conservation status, but today, due to the scarcity of such buildings in Singapore, property prices are… huge,” he told AFP. Despite the harsh environment, there are signs of change in Bangkok.

In recent years, a prominent Chinese-Thai business family has renovated dilapidated 1850s Chinese warehouses, transforming them into the “riverside heritage destination” of Lhong 1919. It now houses a shrine and has become a space for exhibitions, concerts, pop-ups, cafes and food vans – and there are plans to create a wellness centre.

Back at So Heng Thai, Poosak puts his students to the test. Channeling the attitude of his ancestors – who came to Thailand with “a pillow and a mattress” – he is determined to save the family home. “If someone comes and makes me an offer, the answer is no, simple as that, it doesn’t matter how much,” he said. ― Studio ETX