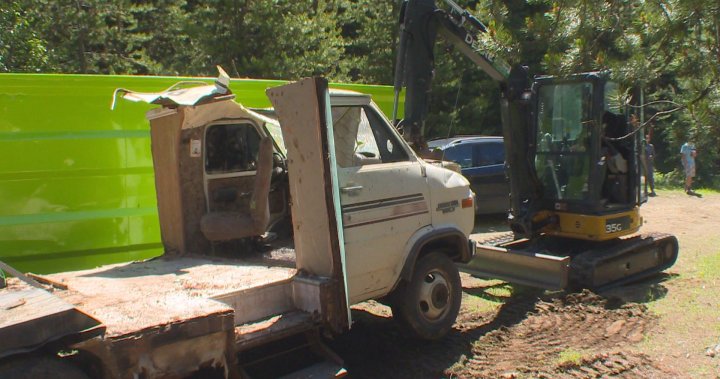 The Okanagan Forest Task Force and its volunteers spent almost an entire day cleaning up a number of abandoned homeless campsites along the James Lake Forest Service Road.

The group began their cleanup around 9 a.m. on Saturday and by 11 a.m. they had already filled an entire dumpster that could hold around 3,000 kilograms of rubbish.

“This is definitely one of the worst areas we’ve seen in this exact location,” said Kane Blake, founder of the Okanagan Forest Task Force.

“This stretch of road is about three kilometers and there is another pile of garbage at the back of the same camp.”

The task force is made up of volunteers from across the Okanagan who work to keep local forests clean and prevent illegal dumping.

They also have a scuba diving team that clears the lakes in the area of ​​trash. On a typical dive, the team removes up to 70 kilograms of waste from the water, with household waste and numerous bottles and cans being among the most common.

“I’ve seen a lot of people stepping on broken glass, it sucks and then some of the bottles we find, I actually find dead fish inside because they’re going in, they’re growing and they can’t come out” , said Ajay. Weintz, a scuba diver with the Okanagan Forest Task Force.

“So it’s probably quite harmful to the ecosystem.”

This same damage applies to land and wildlife.

“There was also a lot of food spillage, which brings in bears and other wildlife, which could very easily be injured on a lot of the trash we saw here today,” Blake said.

A volunteer who came to Saturday’s cleanup at James Lake FSR says more should be done to maintain the Okanagan backcountry.

Nonprofits and Volunteers Team Up for Annual Peachland Watershed Cleanup

“It doesn’t seem to surprise me unfortunately what’s going on in the hinterland and I really think the government should get more involved in overseeing these sites when they get like this,” said volunteer Robin Bloch. .

“It’s our backcountry, people love to come here and enjoy what we have to offer in British Columbia”

This cleanup puts the Okanagan Forest Task Force at approximately a quarter of a million kilograms of trash removed from various sites around the Okanagan since 2016.