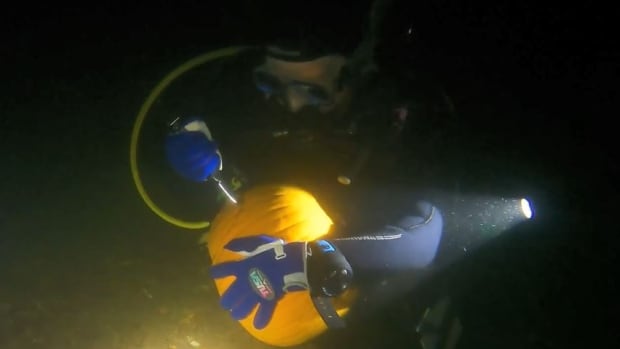 This is what an underwater pumpkin carving competition looks like

The last time Dee Comfort carved a pumpkin underwater, it was an “epic failure.”

Comfort couldn’t push the pumpkin under the water, then his face collapsed. This time, Comfort came prepared – attaching hand weights to a mesh bag to carry the pumpkin, creating a new carving pattern, and wielding a trusty steak knife with “nice teeth on it.”

Comfort’s pointy-head, big nose, and googly-eyed design ended up winning the best pumpkin, in an underwater pumpkin carving competition held Wednesday night along the old Welland Canal. Not that there haven’t been any incidents yet.

“A few times he’s almost made it to the top,” Comfort said. “Cutting off the lid is the tricky part.”

A dozen divers participated, using saddlebags, bricks, and even weighted fitness belts to deepen their pumpkins and test their carving skills. There is a strategy there.

“I don’t think anyone can really understand this without having done it before,” said Matt Mandziuk, who owns Dan’s Dive Shop in St. Catharines, Ontario and hosted the event.

“The bigger the pumpkin, the harder it will be to pour.”

Kevin Langerak is a first-time underwater pumpkin carver, but was warned and therefore brought a medium-sized pumpkin.

“We didn’t get too carried away.”

He ended up carving two sides of his pumpkin – one a traditional face, the other more toothy and demonic.

“My pumpkin skills are limited on a good basis. So underwater, in the dark, it was actually pretty good.”

CBC Radio Ontario Morning4:55This is what an underwater pumpkin carving competition looks like

Divers used saddlebags, bricks, and even weighted fitness belts to deepen their pumpkins and test their underwater carving skills. Haydn Watters traveled to Welland to meet the divers and their pumpkins. 4:55

Divers set up sculpture stations on underwater scaffolding and on a sunken boat, being careful not to stir the bottom to keep things visible. Once pierced, pumpkin guts and seeds spat all over the place. The strange fish walked by to try and grab some bites.

Some divers had design plans before they went down. Others have gone underwater in search of inspiration.

Shonagh Colclough, 15, slaughtered two pumpkins, trying to carve one out of a Star Wars Mandalorian helmet. Quite intimidating, but it was also his first dive in the dark.

His father, Bill, dove alongside him and gave him a pep talk before the pumpkin carving.