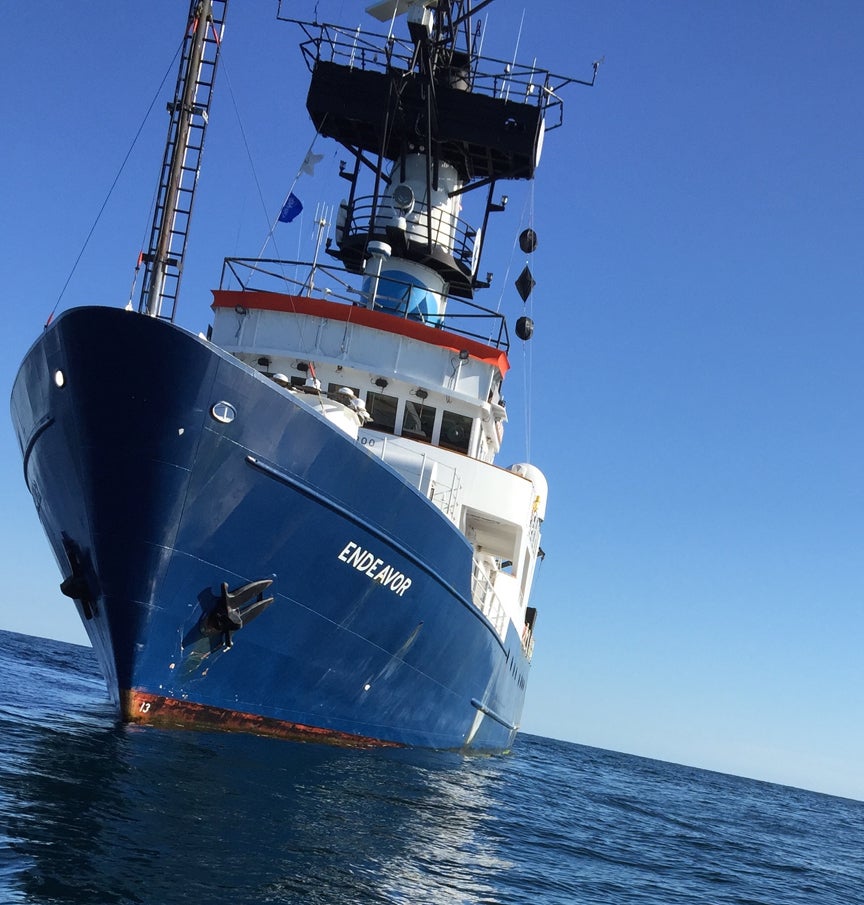 the 6 Day Research Cruise will take place in two shipping stages starting today, From March 25 to Wednesday March 30. Ten undergraduate students from a URI Honors course led by Oceanography Professor Melissa Omand will participate in research activities, which will involve a range of autonomous ocean technologies. Students will use technology to research ocean plastics and underwater sounds.

During the first leg, which will take place today and will continue until March 28, the ship will sail more than 18 hours offshore to recover, maintain and redeploy an anchored oceanographic mooring that is part of a network of observation at sea collecting data on the oceanic twilight zone. The oceanic twilight zone is a predominantly dark “mesopelagic” ocean region, ranging from 200 to 1,000 meters below the surface. With the largest amount of fish biomass on Earth, the area is vitally important, yet remains largely unexplored. On board, technicians from the Woods Hole Oceanographic Institution will work to upload data recorded by various sensors to the mooring line and associated equipment for the service.

URI students will also deploy biodegradable plastic discs at varying depths along the mooring line. When the mooring line is recovered again in August, researchers will examine the microbes that have grown on the plastic discs and the rate of plastic degradation at different depths. The science team will also deploy a “MINION” float that will take images of sinking marine items in the twilight zone of the ocean.

In addition to these efforts, an unmanned mini-boat Passages Pédagogiques, built by students from the Central Falls School District in partnership with GSO, will also be launched during the first leg of the expedition. Thanks to its onboard satellite transmitters, the movements of the mini boat can be tracked and tracked across the ocean.

During the second leg of the cruise, March 28-30, URI students will study how low-frequency underwater sounds travel through the Rhode Island Sound. In addition to using another MINION deployment, students will work with the Effort crew and scientists to deploy a drifting hydrophone array equipped with a high-definition recorder and two miniature RAFOS Ocean Acoustic Monitoring (ROAM) beacons, which will eventually be used to acoustically geolocate fish. To study how an underwater acoustic sweep attenuates, the vessel will move to different distances from the hydrophone array and lower a RAFOS sound source. Data collected from the drifting network will show how sound detection rates and characteristics differ at these varying distances. These sea trials will take place on March 29. (For more information on underwater sound: https://dosits.org).

Educational groups and the public are encouraged to be part of the Try live! conversation! Classrooms, homeschoolers and other educational groups are encouraged to register for free opportunities, live, “ship to school”, where Inner Space Center science communicators and URI students will share their experiences at sea. The public is invited to participate in live events that will be broadcast on various social media channels throughout the duration of the expedition. . All shows will be approximately 25 minutes long and will include a live link to VR Effort.

Want to learn more about ocean science, plastics in the ocean, underwater sounds, or maybe just life on a ship? Receive an update on cruise activities and ask your questions in real time – all you need is an internet connection!

Registration is mandatory participate in programs for educational groups. Login links will only be shared with groups that have signed up. Please use this link save.