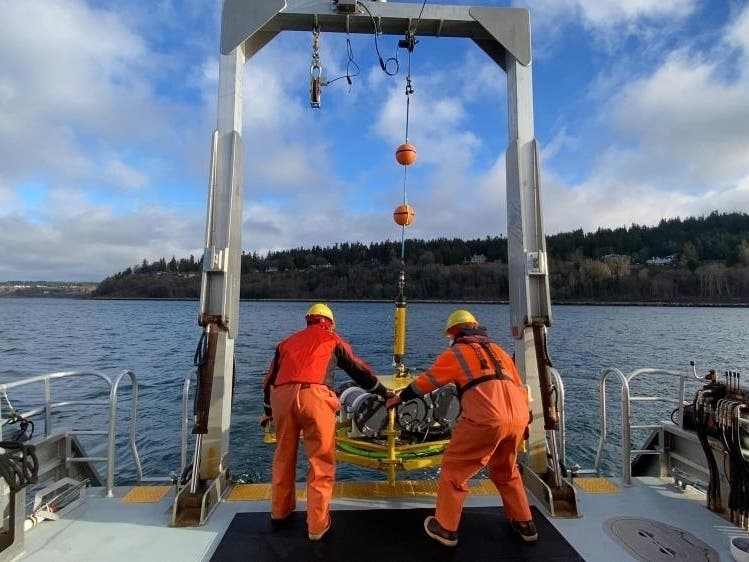 KING COUNTY, WA – Scientists and researchers traveled to Puget Sound this week aboard the King County ship SoundGuardian to deploy a new buoy that will help measure underwater noise from boats and provide real-time information on orca sightings.

According to King County, the study is being conducted on a pro bono basis by SMRU Consulting, a marine research firm that has led similar efforts around the world, including the ECHO program in British Columbia.

For the Puget Sound project, researchers decided to drop the buoy in the winter, when southern resident killer whales are typically in the area looking for chinook and chum salmon. Since killer whales rely on sound for hunting and navigation, noise from ships, ferries, and other vessels can interfere with their ability to find food.

“Our state-of-the-art research vessel is a valuable asset that helps some of the world’s top marine biologists protect southern resident orcas,” said King County Executive Dow Constantine. “The scientific research they produce will contribute to our collective mission to not only track the health of Puget Sound, but also ensure the survival of its marine life.”

The new buoy contains special underwater microphones that measure noise levels from ships and listen for the telltale sounds of orcas on the move, officials said. Both data is transmitted live via an onboard cellular connection and will bolster efforts to quickly engage ships when orcas are nearby, so crews can slow down or change course.

The researchers said the buoy also stores data for later analysis, which will help scientists better understand long-term trends. The latest study is part of the larger Quiet Sound program, run by the Downstate Resident Orca Task Force, which has been working to reduce underwater noise since 2018.

“We are grateful to King County for making the SoundGuardian available for this effort,” said Jason Wood, the project’s lead scientist. “We hope the data generated by this pilot study will help inform long-standing recovery efforts by organizations such as NOAA, Quiet Sound, Orca Network, OrcaSound, The Whale Museum, OceanWise and others.”

Researchers placed the buoy offshore between Seattle and Edmonds, and scientists plan to return to the area in three months to retrieve the device.

Readers can watch a video of the buoy deployment below: