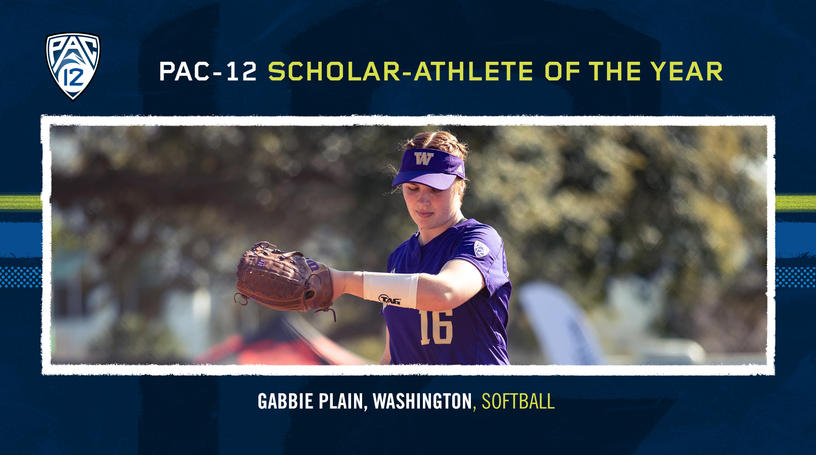 PAC-12 STUDENT-ATHLETE OF THE YEAR

SAN FRANCISCO- from washington Gabbie Plain was named the 2022 Pac-12 Softball Scholar-Athlete of the Year, the conference office announced Wednesday. The award, which is given in each of the 24 Pac-12 sponsored sports, was created to honor collegiate student-athletes who excel both academically and in their sport.

Plain, from Harrington Park, Australia, is a fifth-year double major with a bachelor’s degree in psychology and anthropology, and a double minor in diversity and education. While holding a 3.72 grade point average, Plain was named to the Dean’s List a total of 11 times during her college career. The two-time NFCA All-America Scholar Athlete winner (2019, 2021) has been the recipient of four Pac-12 Academic Honor Roll selections. In 2019, Plain was named to CoSIDA’s All-District All-Academy First Team in her sophomore season.

A three-time All-American on the diamond, Plain currently ranks second among active career leaders in wins (164) and shutouts (44), while also ranking third in strikeouts (1,047). She started 125 games for the Huskies, where she earned four All-Pac-12 first-team selections. In 2018, Plain was an NFCA Freshman National Finalist and was also selected to the Pac-12 All-Freshman Team. She was a two-time finalist for United States Collegiate Softball Player of the Year (2019, 2021) and was named the 2021 Pac-12 Pitcher of the Year. Plain is one of only four student-athletes active with 1,000 career strikeouts and is the second Husky in program history to reach at least 100 career wins. Plain was also named to the Australian Olympic team in 2020. Coming into the playoffs, she finished the regular season with an 18-6 record while holding a 2.02 ERA. Washington won 13th place overall in the 2022 NCAA Division I Softball Tournament and will host the Seattle Regional, which begins Friday, May 20.

In order to be eligible for the Pac-12 Scholar-Athlete of the Year award, student-athletes must be senior (in athletics eligibility), on track for graduation, have a GPA of 3.0 or higher , participate in at least 50% of the competitions scheduled in the sport and have at least one year of residence in the institution. Each Pac-12 institution can nominate one person per sport, and winners are selected by a committee of Pac-12 staff members at the end of each sport’s regular season. The sports achievements of the nominees are taken into account in the voting for the award.