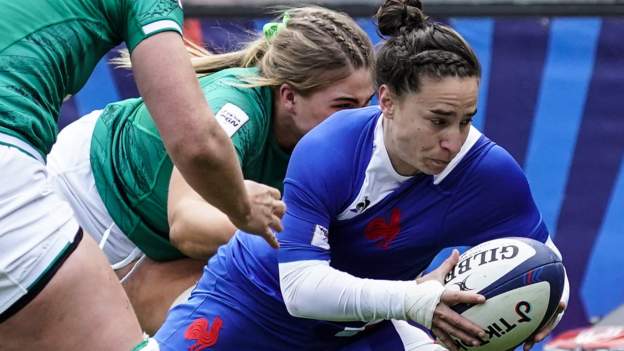 France secured two out of two wins in the Women’s Six Nations Tournament as they secured a comfortable six bonus point victory over Ireland in Toulouse.

Sansus landed for his second before Eve Higgins moved on for Ireland.

France will be looking to continue their winning streak when they travel to face Scotland next Sunday, with Ireland looking to secure their first points on the board when they face Italy in Dublin on the same day.

Ireland were disappointed in their campaign opener last week as Wales won 27-19 in Dublin while France beat Italy 39-6 in their opener.

The odds were against McWilliams’ side at the Stade Ernest Wallon, with France having won 16 of their previous 19 matches against Ireland in the competition, including all those played on French soil.

France’s 20 triumphs in their last 21 outings on home soil had included a 56-15 loss to Ireland in last year’s Women’s Six Nations.

Caroline Drouin put France ahead with a third-minute penalty – but six minutes later Ireland center Higgins dived for what would have been his first international try, only to have it disallowed. After discussion with the televised game official, referee Aimee Barrett-Theron ruled him out for a lineout infraction.

Shortly after, the hosts extended their lead when debuting winger Llorens made a smooth move through the back division as he dived into the corner.

Drouin was off target in her attempt to add the extras, but made amends by hitting her second penalty past the posts after 18 minutes.

France continued their dominance when scrum-half Sansus collected the ball from the blindside from the back of a scrum and ran to score his side’s second try, with Drouin missing the conversion.

The home side’s advantage increased on the half-hour mark as their third try came through second line Forlani, who burst in to touch after a French maul.

Three minutes before the break, the prop Joyeux snarled and managed to smash the ball in for France’s bonus point score, although Drouin was again unable to contribute to the conversion.

Ireland’s first half was marred by indiscipline, unforced errors and set-piece difficulties and their deficit left them a mountain to climb within 40 seconds.

France started the second half where they left off, as Sansus regained possession again from the back of a maul before crossing for his second try. Drouin succeeded in his conversion attempt on this occasion.

Fifteen minutes into the second half, Ireland recorded their only score of the game on solid passing play and patient buildup was rewarded when Higgins finished the move by jumping and running behind the posts .

Their opponents responded, however, and Boulard was given the simple task of scoring after the French moved the ball quickly across the backline, stretching the Irish defence. Replacement Jessy Tremouliere picked up the extras.

Boulard was shown a yellow card for a late tackle in injury time, but that didn’t dampen the home side’s celebrations.