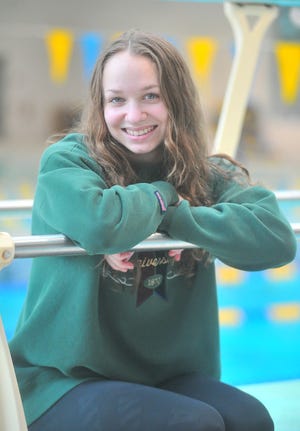 WOOSTER – There’s no doubt that Wooster diver Brooke Balas has a heart and a motor that can’t be stopped. This is one of the main reasons she holds all of the school’s diving records, the Ohio Cardinal Conference reunion record, and the Wooster High School pool records.

It’s also why she’s now considered the best diver to dive for generals in the program’s history.

“Coming out on top is very fitting,” said Wooster swim coach Chris Matthew, who agreed Balas is the best to ever leave the program. “She’s worked so hard there, she’s been committed to diving all year and it shows her level of commitment.

Yet even with all of that already under his belt, Balas saved the best for last. Struggling with a back injury that first occurred in seventh grade, she put on the most daring performances in the Div. I declare diving competition at the CT Branin Natatorium. Nothing was going to stop her as she gazed down the podium to earn All-Ohio honors.

“It was my last meeting,” the elder said. “If I had to, I just wasn’t going to practice all week or even do warm-ups. I would find a way to get on that board and pray that I could land at least three dives.”

She made the cut, even throwing a few of her normal dives and finished 11th with a score of 417.75. It earned him All-Ohio honors for the second time in his career. Even bigger, he capped off a streak that saw her finish second in districts and dominate in the Ohio Cardinal Conference meet.

It was at the OCC meeting that Balas took care of some unfinished business. Going into the competition, the senior held the school record of six dives and the pool record, but kept looking down the board at one name – Deb Silver. In 1975, Silver finished 23rd at State and, more importantly, she held Wooster’s school record of 11 dives of 448.40.

“I looked at that record as a freshman and immediately thought there was no way I was going to touch that,” Balas said. “I didn’t even break 400 the first year and so I thought it was impossible. Over the next two years I had this on my mind, like, ‘Wow, that would be a really cool record to get, but I’m so far from it.'”

As his senior year progressed, doubt began to creep into his head.

“I was starting to get discouraged, it was my last year,” Balas said. “I had kind of come to terms with the fact that I wasn’t going to get it.”

Then came the OCC meeting.

Balas came out on fire, racking up the points early, she nailed her first five dives, which are normally her toughest dives before finishing strong with her more confident dives.

“I knew I was getting good results on every dive,” said Balas. “I knew I would do PR, but I didn’t know if it would be enough. When I found out I had broken his record by 30 or 40 points, I proved me wrong. is what meant the most to me.”

Finishing with a 485.55, Balas broke Silver’s record and along the way broke the pool record and the OCC meet record.

“I always watched her name for four years on that board and always knew she must be amazing to watch, especially with such a high score,” Balas said. “I never really thought I would be good enough or even better, which is the most mind-blowing part.

“I improved in front of her without even realizing it. It wasn’t until my senior year, when it set in, how much I improved in four years, and then I been able to break his 1975 record.”

Even more impressive was how Balas stacked up against the Div boys. I as in 1975, Silver competed with the boys and finished 23rd. This is something that Balas also noted and mentioned how it makes it even more impressive due to how hard the boys can do when diving.

Although she holds all of the Wooster diving records, Balas falters when it comes to being called the best. Instead, the soft-spoken senior singled out those around her, who she said all had an impact on her.

“If you go by the stats, realistically I am, but I’m a bit hesitant when people say that,” Balas said. “I’ve gained confidence over the last four years and I’m confident in my dives, but I was just having fun with it.

“But there are also so many other divers who have helped me get here. There are people who have team spirit, who could be better than me, or more positive than me and they m have all helped get me where I am, I have to give them credit.”

Another person Balas definitely credits is his mother Katie. It can be said that she made the right choice about four years ago when she put her daughter in the car and drove to Guangzhou. It was time to learn scuba diving.

“My mother convinced me,” Balas said. “I was never one of those kids who played multiple sports and the idea of ​​trying a new sport absolutely terrified me. Especially going to Guangzhou where I didn’t know anyone. Basically, she put me in the car and took me there anyway.”

As for the decision to stick with sports, it was much easier for Balas.

“I had it declared four months later,” she laughed. “I said, ‘I might as well stick with it.’

She has signed up to work with a dive club out of Canton run by Phil Barr and has made the trip two to three times a week for the past four years. Barr, who runs his club from Perry High School and Canton McKinley High School, has been instrumental in improving it over the years.

“I’ve built a strong relationship with Chris (Matthew) and Phil (Barr),” Balas said. “It shows the trust between an athlete and a coach. That’s what I appreciate the most.”

“I know Phil would say how proud he is of her,” Matthew said. “She’s the first girl he’s been able to declare and he’s enjoyed working with her.”

Now that his senior year is coming to an end, Balas has made the difficult decision not to pursue the dive at the college level. In college, she would dive from three- and one-meter dives, which would be another learning curve.

“I just don’t think physically I would be able to do it,” Balas said.

Instead, she has focused on cutting back on some colleges and will seek to focus on a science major.

“Obviously I will always remember my records, the feeling of proving myself wrong, of improving, of being announced in districts and in a state,” Balas said. “But I’m at peace with it. Looking at my goal sheets that we did every year, I accomplished everything I wrote down.”

With his list complete and the last items checked off, it’s safe to say Wooster’s best diver in the program’s history has completed the mission.

From that mommy decision, to storming the record books, to a state performance that won’t be forgotten, Balas has proven, like Silver did in 1975, that the greats only come so often. .

Father of deceased diver: the pain is unbearable