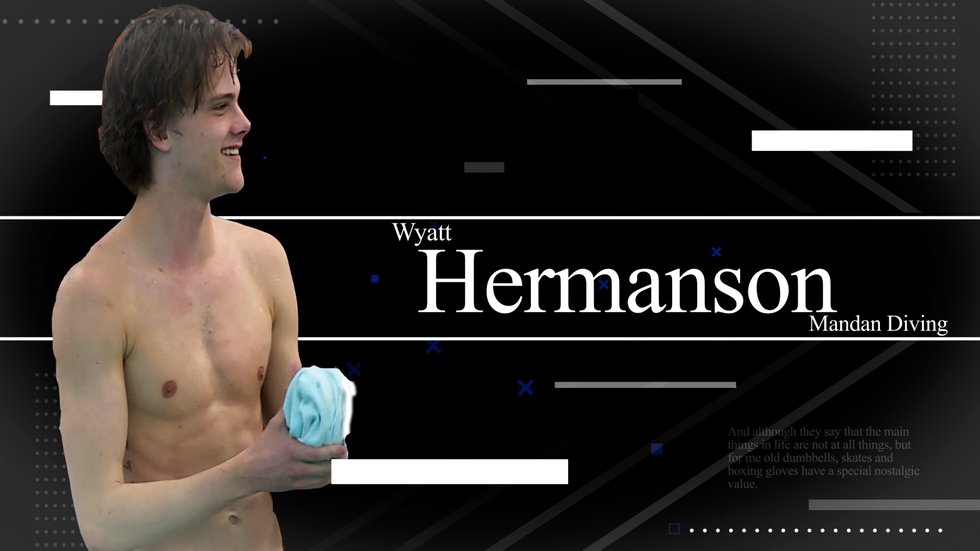 Wyatt Hermanson – from the trampoline to the swimming pool

MANDAN, ND (KFYR) – Diving is a sport that requires your own dedication to succeed. In the case of Wyatt Hermanson, it all started on a spring trampoline. Just four years ago, he was transferred to a spring board. Within three years of diving for the first time, he won his first state championship.

Wyatt Hermanson found the sport of diving in an unconventional way. He took a liking to trampolining in middle school, and after getting the idea to try scuba diving, he joined Mandan’s swimming and diving team in his freshman year.

Wyatt Hermanson, Mandan senior, said: “I practiced freestyle trampoline in my backyard, on my own and with some buddies for a few summers, and joined freshman year because I figured if I could go back on a trampoline, I could go back in water.”

Mandan Swim & Dive Head Coach Claudia Schoellkopf said: “He came in as a rookie with no diving experience, and you could just tell from the trampoline experience that he had this awareness of the air and that body awareness, but at that level when you’re 90 points ahead of the next diver, you have to watch what you’re doing and you have to be happy with how you’re competing. Because that’s where you get better.

He’s come a long way, but diving isn’t the only thing that drew him to the sport.

Hermanson said: “Originally what I think it was, because I was playing football and running track, and both of those sports have a family environment, but when I joined swimming, it was just a lot more intense, it felt right, we felt closer, and I like that a lot more.

Mandan has had nine individuals who have won 15 state diving championships since becoming a varsity sport in 1975. Hermanson is looking to make it two in a row.

Hermanson said: “It started off as an ‘I just wanted to win’ kind of thing, and once I got there, and I just set myself individual goals, and when I hit that goal, I set myself another goal, and I’m just doing it this way.”

And if he could give any advice, it would be to take everything into account.

Hermanson said, “You have to take advantage of it. If it’s something you love to do or are passionate about, you’ll progress naturally, and if you love doing it, chances are you’ll do it more often than others and train for the duration. off season.

Hermanson is in full preparation for the WDA and state meets, both of which will take place next month.

Hermanson took first place in every competition he entered this winter.

Inside the risky cave dive that saved a Thai soccer team